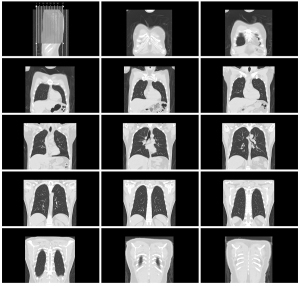 A new technique promises to cut down
the rate of false positives in lung
cancer diagnoses, without missing
a single case of cancer
The standard diagnostic test for early detection of lung cancer in those at high-risk, low-dose CT produces false positives at a rate of 96 percent. But that may soon change with a new technique developed at the University of Pittsburgh and UPMC Hillman Cancer Center.

Using machine learning, researchers were able to reduce false positives while still identifying every case that carried a malignancy, a feat they claim is the first example in which AI has been used to differentiate benign from cancerous nodules in lung cancer screenings.

"This concept is the wave of the future in clinical decision-making for indeterminant lung nodules, and will hopefully include a blood test or something similar in the near future," senior author David Wilson, associate professor of medicine, cardiothoracic surgery and clinical and translational science at Pitt and co-director of the Lung Cancer Center at UPMC Hillman, told HCB News.

Shadows indicating the presence of nodules appear on a quarter of screenings throughout the U.S., but only four percent are actually cancerous. Scans alone cannot indicate who falls into this category, making clinicians hesitant to rule out cancer and leading to greater anxiety among patients as they undergo more costly, additional tests that can carry risks.

Feeding the data of 218 high-risk patients at UPMC into a machine learning algorithm, researchers constructed a model to calculate the probability of cancer. The model relied on the number of blood vessels surrounding the nodule, the number of nodules, and the numbers of years since the patient quit smoking as its most important factors, ruling out cancer if its probability fell below a certain threshold.

"These three features carry the most information about cancer status [of] all other variables," study coauthor Panayiotis (Takis) Benos, professor and vice chair of computational and systems biology and associate director of the Integrative Systems Biology Program at the University of Pittsburgh, told HCB News. "Also the information in each of them is complementary to the other two. Cancer typically needs more energy, so increased vasculature around a nodule has been correlated with cancer. Also the more years since [the subject] quit smoking, the less likely the module is cancerous."

Confirmation as to whether the patients had benign nodules or lung cancer was made later and compared to the model’s assessment. The comparison showed that 30 percent of those with benign nodules could have been spared additional testing, without missing a single case of cancer.

The researchers plan to examine the technique in a larger group. That study, involving 6,000 scans from the National Lung Screening Trial, is currently underway.

The findings were published in the journal, Thorax.