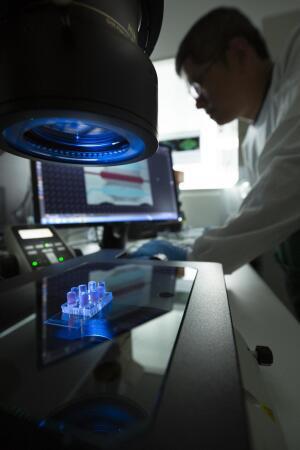 A new chip-on-a-organ technology creates
3D models for which different types and
levels of radiation can be tested on
Australian and American researchers have developed a new technology that could see a reduction, if not elimination, of the side effects associated with radiotherapy.

The organ-on-a-chip solution enables users to develop 3D models that act as subjects for which different levels and types of radiation can be tested to inquire about their individual impacts. It takes the form of a microfluidic cell culture chip that closely mimics the structure and function of small blood vessels within a disposable device that enables clinicians to examine the effects of treatment on body tissues.

"The human microvasculature (blood vessel systems within organs) is particularly sensitive to radiotherapy and the model used in this study could potentially lead to more effective therapies with fewer side effects for cancer patients," said UniSA biomedical engineer, professor Benjamin Thierry, in a statement.

Side effects of radiotherapy can often be brutal and sometimes lead to acute organ failure and long-term cardiovascular disease.

Scientists investigating such impacts currently rely on two-dimensional environments on a slide, hindered by major limitations stemming from the use of animals as test subjects and irrelevant in vitro work that is required.

The organ-on-a-chip technology, however, is expected to reduce reliance on these components, and provide researchers with a better understanding of the impact that radiation has on blood vessels, and at a future point, on all other sensitive organs.

"Better understanding the effect of radiotherapy on blood vessels within organs – and more generally on healthy tissues – is important, especially where extremely high doses and types of radiation are used," said UniSA FII professor Dr. Chih-Tsung Yang in a statement.

The next step in their work is to develop body-on-chip models that mimic organs relevant to specific types of cancer.

The findings were published in Advanced Materials Technologies.