These are patients that surgeons have turned down because they are considered prohibitively high risk. One patient already died waiting for treatment and Kereiakes wants to prevent that from happening again.

Like the BASILICA technique, J-Valve can also prevent coronary artery obstruction. The system’s anchor rings become claspers and capture or lock down the unstented valve material from the prior valve, eliminating the need to slice the valve.

However, J-Valve is still an investigational device and has not yet been approved by the FDA. JC Medical plans to initiate a U.S. clinical trial this year, but whether it comes to market remains to be seen. 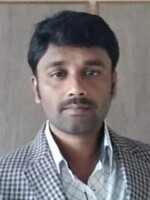 Ramakrishna Edupulapati
“The robotic-assisted cardiac ablation is a revolutionary treatment approach,” said Ramakrishna Edupulapati, industry analyst at Technavio. “This is because of its potential advantages over the manual approach, such as improved catheter stability by minimizing artifacts of manual catheter manipulation, reduced fluoroscopy times, decreased total radiation exposure to both the patient and the operators and very precise catheter navigation to the required spot.”

This technology is beneficial for both highly-experienced and less-experienced operators because the procedure is conducted from a remote station, which eliminates the risk of radiation exposure. Operators have been shown to gain expertise more quickly with the robotic procedure compared to the manual approach.

Pulmonary vein isolation (PVI) is the standard treatment for AF, but recurrence occurs in 20 to 40 percent of cases. In recent years, the robotic catheter systems were developed to improve catheter steerability.
1
2
3(current)
4
5