Improving efficiencies here and now with VR and 3D

Improving efficiencies here and now with VR and 3D 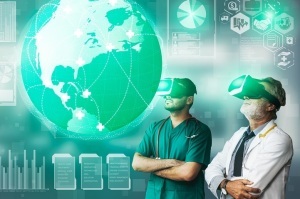 Some of Dr. Brian Park’s professional work seems like a contradiction. He works with virtual reality to improve process in actual reality.

Park taught himself coding in Unity and C# and also took a deep dive into a variety of 3D image processing applications to become adept. He estimates more than 150 hours spent self-teaching. “I remember a lot of late nights programming and debugging code during residency,” he said.

A doctor today, Park’s first love was engineering. He went to college for a graduate degree in the field and later, worked for Medtronic and IBM in that capacity. He later transitioned into medicine, graduating medical school in 2014.

At the time, healthcare professionals were buzzing about 3D printing in medicine. However, once AR/VR headsets started to appear on the commercial market, Park considered the benefits and advantages of visualizing 3D objects using augmented and virtual reality instead. Park went to Dr. Steven Horii, director of medical informatics in Radiology at Penn Medicine and applied for a HoloLens Development Edition in the spring of 2016. He joined the Penn Image-Guided Interventions Lab and began working on his project which led to the poster presentation, “Low-cost Workflow of Generating and Remotely Visualizing 3D Holographic Models for Clinical Practice using Augmented or Virtual Reality," resulting in a second place award at SIIM 2018 for Park and his team.

“We are now projecting 3D holographic models of imaging onto patients during live procedures. Some of our cases can be seen at www.med.upenn.edu/ar4ir,” he said.

The renderings used to create the models use standard DICOM format pulled from PACS, and according to Park, the workflow presented can be used with any system. “There are various open-source and freeware applications available to make AR/VR models from medical imaging. But to our knowledge, there is no freely available, unified software application to generate these models. Multiple different programs and file conversions are currently needed to make a model. You can, of course, pay for proprietary AR/VR software packages but these usually come at a steep cost,” he explained.

For a hospital making the effort to pull in the different freeware needed and pair it with its own existing imaging equipment and PACS, the only cost involved would be that of the headset. Park says popular AR headsets such as the Magic Leap One or the Microsoft HoloLens 2 run about $2,300 to $3,500 respectively and are computers in and of themselves. VR headsets are available in the hundreds of dollars range, but require a physical connection to a computer and they don’t allow for interaction with real patients while they’re being used.
1(current)
2