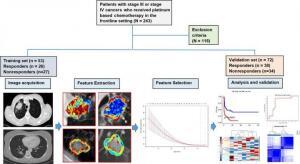 Researchers in Cleveland have found that applying radiomics in the assessment of CT images produces quantitative data points showing characteristics of advanced-stage non-small cell lung cancer inside tumors and in the areas around them that are not visible in the images alone and could distinguish those who would respond well to chemotherapy from those that would not.

"Chemotherapy costs approximately ~ $30,000/patient/year," study author Anant Madabhushi, F. Alex Nason professor of biomedical engineering and director of the Center for Computational Imaging & Personalized Diagnostics at Case Western Reserve University, told HCB News. "Being able to correctly identify patients upfront who are not going to respond to chemotherapy will not only be critical from a patient-centric perspective (i.e. get them on an alternative therapeutic regimen early, one that they are more likely to respond to) but will also save money in unnecessary healthcare costs."

Only one out of four patients responds positively to platinum-based chemotherapy, the usual first-line of treatment against NSCLC. There is no way to predict which patients will benefit the most from the treatment.

The study examined data from 125 patients from Cleveland Clinic who were treated with pemetrexed-based platinum doublet chemotherapy, and were divided randomly into two sets. The training set included 53 patients with NSCLC and had the same number of responders and non-responders, while the validation one had 72.

The authors used a computer to assess the CT scans of lung cancer to identify unique patterns of heterogeneity inside and outside the tumor, and then compared the patterns to images of patients who did and did not respond to chemotherapy. The examination inside the tumor produced an accuracy of 0.68 percent, which increased to 0.77 when combined with an assessment of patterns outside of it. The findings were then fed to a machine learning classifier so that it could identify the likelihood of a lung cancer patient responding to chemotherapy.

In addition to identifying those more likely to respond to chemotherapy, the radiomic features predicted time to progression and overall survival.

Additional steps, however, are required, says Madabhushi. "The data we presented in the work came from a single site and even though the patient cohort was divided into independent testing and training sets, the technology really needs to be validated on scans from an independent site. The other question is to conduct a survey of thoracic oncologists to understand how accurate the technology needs to be (already more than 77 percent accurate) to be clinically useful."

While the basis for the identified radiomic features around the tumor was not widely studied, the researchers hypothesize that their presence indicates an increased fibrotic content in chemotherapy-compliant tumors, and believe that radiomic data derived from CT images could potentially help identify those who carry high risks of recurrence, making it important for them to be carefully observed and examined in follow-up exams.

The findings were published in the journal, Radiology: Artificial Intelligence.