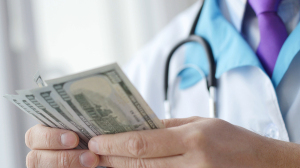 The just-released annual 2019 Physician Compensation Report conducted by Doximity found that while overall physician compensation has plateaued for the first time since 2016, pay for female physicians grew by two percent.

“We have about over 70 percent of all U.S. physicians as members. One of the services we provide is the tool to estimate compensation in what city they are practicing in,” Dr. Mandy Armitage, director of medical content at Doximity told HCB News. “It’s the largest data set in the U.S. on physicians demographics and pay.”

Radiology ranked 10th on the list of the 20 highest average annual compensation by specialty at $429,000. Neurosurgery was the highest at $617,000, and OB/GYN was ranked number 20 at $335,000. Radiologist pay remained steady from 2018 to 2019, although the gap between male and female radiologists opened slightly to about three percent, according to Christopher Whaley, Ph.D., lead author of the study and adjunct assistant professor at the University of California, Berkeley School of Public Health

The study did not include casualty for a continued gender pay gap in physician pay. However, it did conclude that after years of examination, the gender wage gap is now demonstrating a downward trajectory. However, the study found that across metropolitan statistical areas (MSAs), male physicians still earn an average of $1.25 for every $1 female physicians earn. The wage gap closed in 64 percent of the 50 MSAs measured.

“Compensation transparency is a powerful force. As more data becomes available to us, exposing the pay gap between men and women, we see more movements to rectify this issue,” said Whaley.

Among the other findings:

- For the first time in decades, fewer than half of U.S. physicians now own their practice.

“All healthcare markets are local,” said Whaley. “Without having actual data on both local healthcare markets and healthcare compensation by specialty you can’t really say too much about what’s going for physician labor markets. So having this type of data to be able to highlight some of these issues is important… and brings attention to this area.”