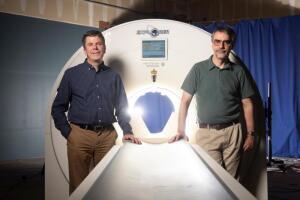 “EXPLORER provides higher quality images which means that smaller lesions should be detectable, as well as lower grade lesions that may have lower radiotracer uptake,” Simon R. Cherry, co-leader of the EXPLORER Consortium and a professor of biomedical engineering at the University of California, Davis, told HCB News. “How that translates into better diagnosis remains to be seen. An immediate challenge will be learning to read these images, which provide a level of detail never before seen in PET. Thus, an important part of our plan is to acquire scans on "normal" asymptomatic subjects in the first several months to better understand normal uptake patterns now that we have higher spatial resolution and higher signal-to-noise images.”

First announced in 2015, construction of the total-body scanner was completed in May 2018 using roughly 8 to 10 times more materials and electronics than a standard PET system. It can image the entire body in as little as 20 to 30 seconds at a speed up to 40 times faster than that of a typical PET scanner at a 40 times lower dose rate, and is now available for clinical use following its clearance by the FDA in January.

The four studies were conducted in conjunction with Zhongshan Hospital in Shanghai and involved four humans who were scanned with EXPLORER human scanner after being injected with different dose levels of 18F-FDG. The doses were administered at varying ranges of time to assess the dynamic range of the scanner.

The first focused on scanning time with EXPLORER, with the subject undergoing a 20-minute list-mode scan after receiving an injection of 290 MBq of 18F-FDG 82 minutes beforehand. Clinicians were capable of visualizing small-range features without the inference of high image noise, due to high count-density, and concluded the scan time could be reduced, with images of diagnostic quality produced at 37.5 seconds and arguably, 18.75 seconds.

For the second study, the subject was scanned one, three, eight and 10 hours after injection, each one lasting 14 minutes. Images were deemed to be of high quality despite the reduction of injected activity over 10 hours. Clinicians also collected data from scans in list-mode at the time of injection and for one hour after, segmenting it into one-second intervals, which were compared over a two-minute time frame. The result was dynamic whole-body images with high temporal resolution.
1(current)
2