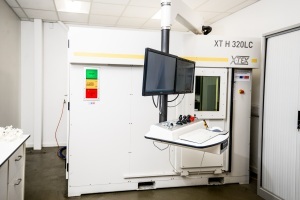 Commonly deployed in industry and materials research, researchers from WMG at The University of Warwick opted for the 3D micro-CT scanner to examine the rib cage of Teri-Rae, whose mother, Abigail Palmer, was sentenced last week for the infant’s death in January 2017. With it, they identified ten fractures, including two microscopic injuries, that would not have been identified by conventional CT scanners.

"We used a Nikon 225kV micro CT scanner, which produces images at 60 microns. That's 10 times the resolution of a hospital scanner," professor Mark Williams of WMG at the University of Warwick told HCB News.

Born on October 24, 2016, Teri-Rae lived just over two months before dying on January 2 of rib fractures, and a loss of oxygen to the brain. Palmer, who claimed to be napping on her sofa with Terri-Rae lying on her chest, said she woke up to find the child “blue and lifeless” and phoned paramedics. Medical personnel were unable to resuscitate the little girl. While initially treated as non-suspicious, a skeletal examination ruled this out upon finding the multiple fractures, according to the Birmingham Mail.

Providing images with 1000 times more detail than a typical hospital scanner, the high-resolution X-ray modality revealed that the injuries took place over a four to 12 hour period between 3 a.m. and 11 a.m.

Palmer, who has a history of drug and alcohol abuse, claimed to be at the pub for six hours on New Year's Day, drinking squash instead of alcohol, as doing so would have violated the terms of a Child Protection Plan she was under.

“We don’t believe her … and neither did the jury," said West Midlands Police sergeant Mick Byron from the child abuse investigation team in a statement. "We suspect she came home drunk, was awakened by her baby in the night and inflicted these terrible images in response to Teri-Rae’s crying.”

He added that Palmer had no “plausible accidental explanation” for her daughter’s injuries, and that there was “no indication Teri-Rae suffered a bone fragility condition.” She also was not “independently mobile enough” to harm herself, he said.

“Significant force is required to cause rib fractures in a baby … the presence of rib fractures in a baby of this age is indicative of abusive, deliberately inflicted injury,” he said. “This was a truly heartbreaking case to investigate, that a little baby’s life was taken by the one person who should have been protecting her.”

Charged with manslaughter and wounding, the judge sentenced Palmer to 13 and a half years, passing a concurrent sentence of two years for the wounding charge.

Williams says the scanner is unsuitable to examine live patients but could be applied more to assess remains of abuse victims such as Teri-Rae.

"Higher dosages of radiation and limited field of view makes it unsuitable for medical applications on live patients," he said. "However, we have used it to scan cadaveric specimens to validate surgical procedures and medical implants, and could use it to understand modes of subtle injuries in cases such as this one."

The exam was conducted as part of an ongoing research collaboration between Warwick University and West Midlands Police, which uses such scanning technologies to aid homicide investigations.