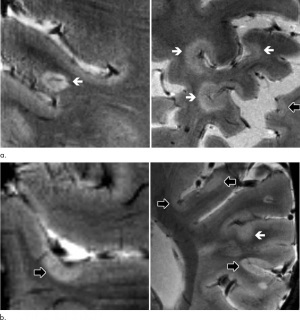 Researchers at the Athinoula A. Martinos Center for Biomedical Imaging at Massachusetts General Hospital in Boston assert that the ultra-high-field strength MR modality enables greater visualization of cortical lesions in the grey matter of the outer layer of the brain, which their findings claim is a strong predictor of the level of neurological disability experienced by people with multiple sclerosis. Access to the recently cleared device for clinical use, however, is limited by a number of variables.

“The magnet is still relatively expensive for large-scale deployment. There also needs to be further standardization and optimization of protocols for wider clinical use,” study senior author Dr. Caterina Mainero, director of Multiple Sclerosis Research at the A. A. Martinos Center for Biomedical Imaging, told HCB News. “Nevertheless, for certain protocols, the overall image quality is undoubtedly improved at higher magnetic field strength. This allows better characterization of many aspects of brain pathology as is the case of cortical lesions in patients with multiple sclerosis.”

With more than twice the magnetic field strength of 3T scanners, 7-Tesla solutions are more sensitive to and can detect cortical lesions that are strongly correlated with neurological disability and disease progression, and cannot be seen with conventional scanners.

Mainero and her colleagues employed the solution on 20 relapsing-remitting and 13 secondary-progressive MS patients, as well as 10 age-matched healthy controls. Twenty-five MS patients developed new cortical lesions that were more frequently detected by the 7T MR system than with lower-field ones, producing findings that showed twice as many lesions in the cortical region than the number in the brain’s white matter.

It also showed that cortical lesions tend to develop in grooves on the sulci, the brain’s surface. While the reasons for their development here are unknown, the researchers hypothesize that the restricted flow of cerebrospinal fluid in this location might play a role by making the sulci more vulnerable to inflammatory responses.

The total volume of lesions was a predictor of neurological disability at both baseline and follow-up assessment, and was found to be a better predictor for the progression of disability than white matter lesions, which has been the basis for years of such measures in MS. The researchers argue that the findings stress the need for cortical lesion assessments to be a main component in the evaluation of MS progression in patients.

“We, and other groups, will need to replicate our findings in larger patient cohorts and possibly with a longer follow up period to determine if cortical lesion features seen at 7 Tesla can identify early patients at high risk of disease progression,” said Mainero. “Another goal is to use 7 Tesla to monitor the effects of treatments on cortical lesions.”