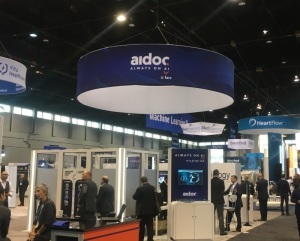 Aidoc at RSNA 2018
Artificial intelligence (AI) software company Aidoc has raised $27 million in venture capital funding to grow and serve more hospitals, evidence that AI is proving to be a benefit to patient care.

The investment brings the company’s total funding to $40 million.

“The value they bring to patient care became evident,” said Dan Krasnostein, a partner at Square Peg Capital, in a statement announcing the funding. “Aidoc is the most mature company in AI for radiology, and we believe our partnership will help fuel their triple-⁠digit growth.”

Elad Walach, Aidoc’s co-⁠founder and chief executive officer, said the company is looking to expand its AI technology across the medical imaging space and grow its customer base.

“We need the funds to fuel that growth to reach all of those accounts,” Walach told HCB News.

Aidoc has only been around for two-and-a-half years, and Walach said the company is gaining “serious traction” in the industry, working with dozens of facilities, recently analyzing its millionth CT scan in real time, which the company says is the largest number of images analyzed by an AI tool.

The company’s goal is to reach 500 hospitals in the next two years. It also plans to release products for the oncology space and expand its AI solution to X-ray.

“It’s about continuing to move fast and utilizing the opportunities we have to change the industry,” Walach said.

At RSNA, in November, Aidoc announced that it is partnering with the American College of Radiology’s Data Science Institute to create the industry’s first registry for AI in imaging, with the goal of monitoring AI’s clinical impact.