Studies unveil measures for reducing resistance to radiotherapy in tumors

Studies unveil measures for reducing resistance to radiotherapy in tumors 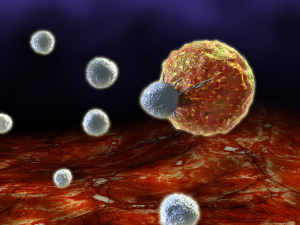 The cause of such resistance in all three studies falls on Treg cells, immunosuppressant cells that prevent effector T cells from destroying healthy tissue. This function, however, also prevents the effector T cells killing cancer cells. Combined with other factors, the researchers found that reducing the amount of Tregs resulted in less resistance to radiotherapy, helping to make it a potent immunotherapeutic agent.

“The genomics and characteristics of the cancer cell still matter, but so does the surrounding tumor microenvironment,” Sana Karam, assistant professor of the department of radiation oncology at the University of Colorado, told HCB News. “In people, we are irradiating the cancer in its entirety and the effects will be on the tumor cells and other cells within the tumor. Some of these effects will be suppressive to the growth of cancer cells while others may not be. To be able to reach a point where we can talk about tumor eradication, we have to leverage the pros of radiation in suppressing tumor growth and overcome any tumor promoting properties.”

The stimulation of the immune system with radiotherapy to attack cancer cells throughout the body was first witnessed by radiation oncologists over a decade ago, prompting numerous attempts to replicate the actions and create systemic anti-cancer activity by combining radiotherapy with immunotherapy. Such attempts, however, have not been successful, even when employing triple therapy and different targeted strategies.

Alone, radiation therapy was not enough to destroy head and neck cancer models grown in mice in the first study. Treg depletion alone had the same outcome. When combined together, however, a potent reduction in tumors was observed, with radiation acting as stimulant that "turned on" the T effector cells of the immune system and enabled them to attack the cancer. The decrease in Tregs, meanwhile, prevented the cancer from "turning them off".

The approach is limited, due to there being no agent able to eradicate Tregs safely in humans. The study, however, may offer a possible solution by inhibiting communication between the proteins EphB4 and ephrinB2. Essential for neurogenesis in the developing brain, studies have revealed an up-regulation of both in various cancers, including head and neck, and pancreatic malignancies. Inhibiting the interaction between them reduces the growth of tumors, while depleting the number of T-regulatory cells.
1(current)
2

FLASH therapy: An inside look at an innovative treatment technology