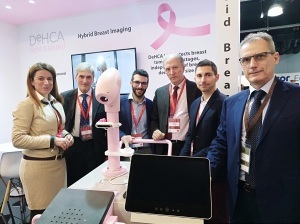 Danilo Gennari (far right)
DeHCA Light & Sound is a new form of breast cancer detection technology, but rather than visualize tumors it relies on angiogenesis to detect increases in deoxyhemoglobin. HealthCare Business News spoke to Danilo Gennari, an engineer and member of the Board of the Italian Association of Clinical Engineering (AIIC) who is the scientific director of the DeHCA Project, and principal creator of the device.

HCB News: Without getting too technical, what is angiogenesis and what is deoxyhemoglobin?
Danilo Gennari: Angiogenesis is the growth of new capillary blood vessels in the body; it is an important natural process used for healing and reproduction. The body controls angiogenesis by producing a precise balance of growth and inhibitory factors in healthy tissues. When this balance is disturbed, the result is either too much or too little angiogenesis. Abnormal blood vessel growth (abnormal angiogenesis), either excessive or insufficient, is now recognized as a “common denominator” underlying many deadly and debilitating conditions, including cancer, skin diseases, age-related blindness, diabetic ulcers, cardiovascular disease, stroke, and many others. The list of diseases that have angiogenesis as an underlying mechanism grows longer every year. The oxygen consumption in growing tumors is higher than in normal tissue and results in abnormally deoxygenated hemoglobin – abnormal concentration of deoxy-hemoglobin – in the blood vessels feeding the tumors.

HCB News: What is the relationships between deoxyhemoglobin and breast cancer?
DG: Neo-angiogenesis is the phenomenon by which tumor cells grow beyond one millimiter diameter approximately, developing their own circulation system to get fed. This is done mimicking the circulatory system of the healthy tissue nearby. As said, neo-angiogenetic blood vessels are characterized by abnormally high concentration of deoxy-hemoglobin. Consequently, abnormal concentration of deoxy-hemoglobin can be associated to the neo-angiogenesis at the root of the formation of new tumors.

HCB News: The system is primarily comprised of an LED light table and an ultrasound transducer. How do these two components work together to detect potential cancers?
DG: The DeHCA L&S idea is that, in early stage tumors, it is easier to find the tumor-feeding vascular network rather than the tumor itself, because the vascular network arises early in the disease, and results in vascular changes affecting vessels beyond the tumor itself, thus being earlier identifiable. Identification is achieved evaluating the DeHCA biomarker (Deoxy Hemoglobin Concentration Alteration) which represents the variation of concentration of deoxy-hemoglobin within the breast tissues and, as said previously, its abnormal values can be associated to the neo-angiogenesis at the root of the formation of new tumors.
1(current)
2
3
4