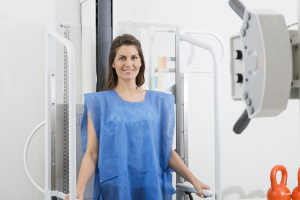 The number of fixed general X-ray
systems using DR technology has
risen to 80 percent from half in
2015, according to an IMV market
report
The proportion of fixed general X-ray systems in the U.S. equipped with digital radiography (DR) technology has risen to over 80 percent of the installed base, according to the IMV 2019 X-ray/DR/CR Outlook Report.

The statistic indicates a rise by 30 percentage points from its 2015 status when half of the installed base had switched to DR, and is further evidence that the adoption of this change is expected to continue on an upward trajectory among healthcare providers.

“The timing may be a convergence of improvements,” Lorna Young, senior director of market research at IMV Medical Information Division, told HCB News. “DR technology has evolved to make the X-ray image quality acceptable to radiologists. The radiology community and healthcare systems have fully adopted the use of PACS technology to store and communicate digital images for all modalities. Healthcare providers can transition to DR, not only by replacing their general radiography systems, but as an alternative, by using DR retrofit kits, which is a lower-cost alternative, as they can retain their existing patient table and tube assembly while retrofitting the detector.”

The motivation for converting X-ray to a digital-based system stems from the emergence of CT and MR systems in the 1980s, which enabled providers to produce digital images. Initially making a switch to cassette-based CR technology, manufacturers eventually began developing general radiography units with DR technology, speeding up the acquisition and processing time for images.

These transitions are made clear in an overview of the last nine years, with DR technology in 2010 only present in a little over a quarter of fixed general X-ray systems installed in U.S. hospitals. Seventy percent of machines were computer-radiography-based, and four percent used film.

The passage of the Consolidated Appropriations Act of 2016, however, helped changed this scenario by providing funding to speed up the transition to DR, and subjecting providers who did not adopt the technology to penalties for noncompliance in 2017-2018. Young says inclinations to hold on to CR technology may be due to a variety of reasons.

“CR technology may still be preferred by certain providers to do scoliosis or long leg exams as it can cover a very large field of view. Some DR providers do provide long-length DR detectors, but this is more costly than CR technology, due to its size,” she said. “Providers, particularly small hospitals, also evaluate the financial trade-off of cost to replace or upgrade to DR versus the reduced Medicare payments. In addition, priorities for using capital funds for other imaging equipment may take precedence.”
1(current)
2