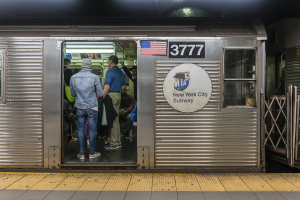 Subway ads in New York City promoting CyberKnife for prostate cancer are leaving straphangers with "inaccurate impressions" of how it ranks against other therapies in “effectiveness and safety," according to a survey presented at the American Urological Association (AUA) annual meeting in Chicago.

The ad campaign — which is for Winthrop Hospital in Mineola, New York, not CyberKnife maker Accuray — states:

"CyberKnife is the biggest advance in prostate cancer treatment in a decade. CyberKnife is as effective as surgery for prostate cancer. But there's no cutting, no pain, no incontinence and less risk of impotence. Treatment takes just one week — five brief appointments."

The survey results about the ad campaign were discussed at a press briefing by lead author Dr. Joseph Caputo, a urologist at Columbia University Irving Medical Center and New York–Presbyterian Hospital.

"This advertising tends to emphasize benefits over risks and offer unsubstantiated claims," he said at the briefing, according to Medscape.

Caputo and senior author Dr. Elias Hyams surveyed a total of 400 men, which they split into four groups.

A fourth group acted as controls and were shown an ad that had nothing to do with either CyberKnife or prostate cancer.

The subjects were then asked to discuss risks and benefits of the CyberKnife and whether they would pursue it for treatment compared to other therapeutic modalities.

Participants who saw just the CyberKnife ad material had a 40 to 45 percent higher likelihood of preferring it over other treatments — and they were the only group to think CyberKnife better when it came to erectile and urinary function preservation.

For the second group, shown the ad with disclaimers, the percentage favoring the treatment dropped to 20 percent.

The third group, which only examined the more scientifically balanced information, had the most accurate idea of the risks and benefits.

The study was begun after Caputo and Hyams starting seeing the ads all over the subway. The ads, observed briefing moderator Dr. Stacy Loeb, an NYU Langone radiologist, are “front and center” at his own home train stop. The goal was to shed light on the larger issue of the direct-to-consumer (DTC) type of marketing it represents, which, they said, “we believe should be discussed at the AUA meeting."
1(current)
2
3