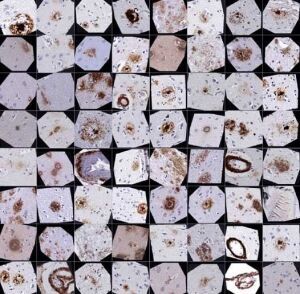 A new AI tool can detect and classify
amyloid plaques in the brains
of Alzheimer's patients
(Credit: Keiser / Dugger labs).
Detecting one of the hallmarks of Alzheimer’s disease may soon be a task for the computer.

"We still need the pathologist," lead author Brittany Dugger, an assistant professor in the UC Davis department of Pathology and Laboratory Medicine, said in a statement. "This is a tool, like a keyboard is for writing. As keyboards have aided in writing workflows, digital pathology paired with machine learning can aid with neuropathology workflows."

To teach a computer to identify, analyze and differentiate between various types of tiny amyloid plaques in large slices of autopsied human brain tissue, Dugger teamed up with Michael Keiser, an assistant professor in UCSF’s Institute for Neurodegenerative Disease and department of pharmaceutical chemistry, whose team designed the convolutional neural network (CNN) algorithm.

It also created a web platform called “blob or not” that enabled Dugger to look one-at-a-time at highly zoomed-in regions of potential plaques and quickly label what she observed. With this tool, she was able to annotate or label 70,000 blobs or plaque candidates, at a rate of 2,000 images per hour, from a collection of half a million close-up images of tissue from 43 healthy and diseased brain samples.

The UCSF researchers then used this database to train the algorithm, based on how Dugger analyzes brain tissue, enabling it to identify in the same way she does different types of brain changes seen in patients with Alzheimer’s disease, including differentiating between so-called cored and diffuse plaques, and detecting abnormalities in blood vessels.

The algorithm, when tested, proved to be successful in processing an entire whole-brain slice slide with 98.7 percent accuracy at a speed only limited by the number of computer processors used. The study used a single graphics card similar to those used by computer gamers.

Additional testing of its identification skills to ensure analyses were biologically valid also took place, with Keiser saying the solution was “no better” than Dugger at identifying plaques. He notes, however, that its use is “tireless” and “scalable”.

"It's a co-pilot, a force multiplier that extends the scope of what we can accomplish and lets us ask questions we never would have attempted manually,” he said in a statement. “For example, we can look for rare plaques in unexpected places that could give us important clues about the course of the disease.”

Dugger and Keiser hope that use of algorithms such as their own will become standard in neuropathology for analyzing large amounts of data and identifying patterns that provide new insights into causes and potential treatments for Alzheimer’s disease.

The tool, along with the study data behind it, is currently available online, and is already being used by researchers in their own labs.

The findings were published in the journal, Nature Communications.