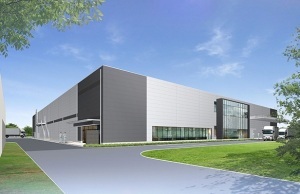 The 'smart' facility will help meet
growing demands for endoscopes
Fujifilm Corporation has invested approximately $36 billion in the construction of a new "smart" manufacturing facility to enhance production of its endoscope technology.

Located at the site of Fujifilm Techno Products, the facility will leverage the power of AI and Internet of Things (IoT) technologies to increase production efficiency and create endoscopes that facilitate growing demand for direct in vivo observation capabilities and the reduction of patient stress.

Burdened by complex manufacturing processes, endoscope production requires refined and highly precise processing technology for insertion into a patient’s body, as well as high performance in operability, ease of insertion and durability. As a result, thorough understanding and skills of experienced technicians are necessary for installing tiny lenses and visually inspecting focus and color accuracy of endoscopic images. This makes the task of facilitating quality production challenging.

The endoscopes produced will be compatible with Fujifilm’s existing systems such as ELUXEO and LASEREO, which use distinct light wavelengths for observation to support detection of minute tumors. Both also offer imaging enhancing functions such as BLI to highlight fine blood vessels and structures in the mucosal surface of organs and LCI to accentuate subtle tonal differences in red coloration in endoscopic images, allowing clinicians to observe changes characteristically seen in the early stages of cancer.

The manufacturing facility will be able to control the movements of workers and goods, and monitor the condition of equipment with its IoT capabilities in real-time. It will use a centralized platform with sensors installed across the facility to accumulate conventionally managed data such as work hours, manufacturing and inspection records, and parts inventories, as well as equipment operation status and workers’ traffic.

This will help pick up speed in the cycle of analysis and improvements for streamlining facilities' operation, along with Fujifilm’s investment, which will double endoscope production capacity at FUJIFILM Techno Products.

The announcement of the facility comes just months after the completion of an agreement between Fujifilm and group purchasing organization, Gastrologix, to make Fujifilm’s entire portfolio of endoscopes available through the GPO, which works solely with independent gastroenterology physician groups. The solutions included in the deal are the ELUXEO Endoscopic Visualization System and 700 series endoscopes; Fujifilm’s pulmonary imaging gear, including its 530 series bronchoscopes and ultrasonic video endoscopes and bronchoscopes; and its Double Balloon Endoscopy System.

“We appreciate the confidence Gastrologix has instilled in Fujifilm by selecting us as their exclusive vendor of choice for endoscopic imaging solutions,” Fujifilm Medical U.S.A. chief operating officer Johann Fernando said in a statement at the time, adding that the deal will allow its ELUXEO and 700 Series Endoscopes to get “into the hands of even more healthcare providers.”

The "smart" facility is expected to be fully operational by September.