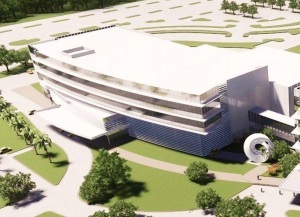 Mayo Clinic is set to build a new $233 million integrated oncology facility including proton beam therapy on its Florida campus.

The 140,000-square-foot facility, which will house a two-gantry proton system, is now scheduled for a late 2023 opening, according to a Mayo statement.

The new facility will be near the Mangurian Building, which offers hematology and oncology care, and the Oncology Infusion Center, in order to better integrate cancer care on the campus.

Adding proton therapy to the campus anti-cancer arsenal will also make Mayo's more competitive with other leading U.S. cancer treatment centers, according to the clinic.

Proton therapy had already been added to the rosters of other Mayo Clinic campuses in Rochester, Minnesota, in 2015 and Phoenix in 2016.

The $300 million, 140,000-square-foot New York Proton Center was ten years in the making, and will “deliver an unparalleled patient experience, leveraging the most advanced proton technology available anywhere in the world,” CEO Allan Freeman said in a statement at the time.

The center is equipped with the Varian ProBeam system. “It has been an honor for Varian to collaborate with our long-term strategic partners in radiation oncology on the development and opening of the New York Proton Center,” Kolleen Kennedy, president, Proton Solutions and chief growth officer at Varian, said at the time, adding that, “we look forward to expanding our close partnership in the fight against cancer, including research for innovative treatment paradigms such as Flash therapy.”

In May, the U.K. opened its third proton therapy center — the Rutherford Cancer Centre at Bomarsund, Northumberland.

The arrival of three Rutherford proton beam therapy centers in Wales, Berkshire and now Northumberland plus an NHS facility in Manchester means the landscape for advanced cancer care has been transformed in the U.K.

“The opening of the proton beam therapy suite at our North East center is an exciting milestone in the development of high-energy proton beam facilities in this country. Historically, the U.K. has lagged behind leading countries in the provision of this form of cancer treatment but now a complementary mix of private and public facilities are offering patients access to the most advanced technology that can enhance patient outcomes,” Mike Moran, CEO of Proton Partners International, which operates the Rutherford Cancer Centers, said in a statement at the time.