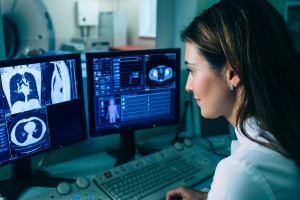 The first woman to chair the American College of Radiology Board of Chancellors, Dr. Geraldine McGinty, led a topical panel presentation at the 2019 SIIM meeting in Aurora, CO. In a wide-ranging discussion titled Challenges for Career Advancements for Women in Imaging Informatics, the three panel members spoke about everything from STEM education and pink toolboxes, to imposter syndrome and female cultural barriers.

McGinty said that the evidence gives reason to be both positive and negative about opportunities for women in medicine and technology in general. She cited an AAMC article which stated that women were the majority of medical school applicants last year. McGinty also noted that the current 2019 SIIM conferences leadership committee are all women.

This information was countered by a research article published last week by Cornell University, which determined that gender trends in computer science authorship between males and females will not reach parity at the current rates of publication by women until 2100.

McGinty noted longstanding rules that required tenure to serve on a review committee worked against women. She cited a report which stated that, “Academic medicine boasts a wealth of accomplished female physicians, scientists, and educators, but they are hitting the glass ceiling when they try to advance to full professors, department chairs, deans and hospital chiefs.”

“Why do we care?” asked McGinty. “We’re doing it for patients. Our own diversity serves patients.”

A second panel member, Teri Sippel Schmidt, adjunct professor of biomedical engineering at the Medical College of Wisconsin and Marquette University, said women in medicine and technology suffer from systemic cultural bias. She cited data showing that less than 70 percent of girls who are interested in science, technology, engineering, and mathematics (STEM) at age 11 remain so at age 15. Some of the top reasons for this fall-off include:

1: Lack of role models.
2: Perceived inequality in the workplace.
3: Parents and/or teachers are dismissive.
4: A need to be perfect (a B in math not good enough).
5: A lack of members.
6: A lack of hands-on STEM projects.

Sippel Schmidt added that the rate of STEM involvement of females from middle school drops to 30 percent by high school, to 17 percent in undergraduate engineering to numbers so minuscule in healthcare IT and radiology as to defy measurement.

She said that female scientists need to be role models for girls to encourage them to learn and appreciate STEM skills. For her own nieces, she bought pink toolboxes and tools. These items are used to complete hands-on building projects to get comfortable with the idea that girls can learn the same skills as boys. She also cited community outreach STEM programs through the Girl Scouts and the “Girls Who Code” initiative.
1(current)
2