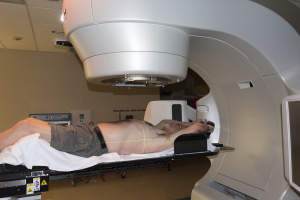 A new technique proposes targeting
a small spot deep within the
body to concentrate radiation
doses to tumors
British and American researchers led by scientists at the University of Strathclyde have proposed a new technique for concentrating the delivery of radiation doses to tumors, while reducing damage to normal, healthy cells.

The method calls for focusing high-energy particle beams on a small spot deep within the body that may enable clinicians to precisely target tumors and minimize exposure to surrounding tissue.

"Around half of the population will suffer from cancer at some time in their lives. Of these people, half will be treated using radiotherapy or a combination of radiotherapy and chemotherapy. One of the challenges in radiotherapy is to deposit a high radiation dose in a way that the dose fully 'conforms' to the tumor, to ensure that all cancerous cells are killed, while preventing damage to healthy cells,” said lead scientist professor Dino Jaroszynski in a statement. “Our study shows that we can very simply focus radiation onto a tumor to irradiate it while reducing the dose in surrounding healthy tissue.”

Conventional X-rays are often absorbed into the body during radiotherapy, diminishing their effects and leading to a high entrance dose. Proximal and distal doses can be as high as, or higher than, the radiation dose delivered to the tumor. Other forms of treatment include low energy electron beams from linacs, which are seldom used as they cannot penetrate deep within the body. While also effective, heavy particle modalities such as protons and ion therapies are expensive for patients to access.

The team compares its method to a magnifying glass focusing the sun’s rays to a small spot, in which a magnetic lens is used to focus a particle beam to ablate the tumor. It aims to utilize it with very high energy electrons (VHEEs).

"Electrons, much like protons, have properties specific to particles. The significantly smaller electron mass, however, must be compensated for by increasing their energy and therefore inertia to achieve an effect similar to high-mass particles. We push the envelope to fully investigate the potential advantages of very high energy electrons in radiotherapy,” said Karolina Kokurewicz, a Strathclyde Ph.D. student working on the project, in a statement. "In our studies, we show that a VHEE beam, when focused, can be easily controlled to target precisely tumors similar to beam scanning modalities. The net effect is a greatly enhanced dose profile that conforms closely to the target volumes and potentially provides better tumor control. It is a first step to realize the real potential of VHEEs."

The team plans to study its claim with laser-produced high-energy electron accelerators by setting up a new medical beam line at the Scottish Centre for the Application of Plasma-based Accelerators (SCAPA) at Strathclyde.

"These ultra-compact laser-wakefield accelerators are only millimeters long and can be easily focused; most of the space is taken up by the power supply, which is the laser,” said Jaroszynski. “This is a very exciting new project that has potential to eventually transform radiotherapy by reducing its cost, while improving its effectiveness."

The study consists of researchers from the University of Strathclyde, Strathclyde Institute of Pharmacy and Biomedical Sciences, the Universities of Glasgow and Surrey, the Wolfson Wohl Cancer Research Centre, the UK National Physical Laboratory, and Indiana University School of Medicine.

The findings were published in the Nature Research journal, Scientific Reports.