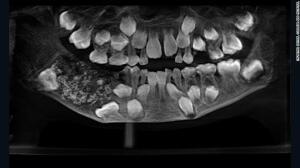 An X-ray scan revealed an
excess of what turned out to
be 526 teeth lodged in a
young boy's jaw
A 7-year-old boy has recovered following the surgical extraction of over 500 teeth from his lower jaw.

The excess of pearly whites was uncovered last month by an X-ray scan performed at a hospital in India, where the young boy, named Ravindranath, was admitted after complaining of swelling and pain near his molars in his lower right jaw.

"There were a total of 526 teeth ranging from 0.1 millimeters (.004 inches) to 15 millimeters (0.6 inches)," Dr. Prathiba Ramani, the head of Oral and Maxillofacial Pathology at Saveetha Dental College and Hospital, told CNN. “Even the smallest piece had a crown, root and enamel coat indicating it was a tooth.”

The specimens were located in a sac, which was described as a “kind of balloon with small pieces inside,” embedded in the lower jaw. Surgeons removed the sac by drilling a hole from the top so as not to break the bone from the sides and to spare the boy reconstructive surgery.

Upon emptying the contents of the bag, doctors then spent four to five hours examining each tooth. Their findings point to compound composite ondontoma, a rare condition characterized by the presence of a benign tumor linked to tooth development. The cause of the condition is unknown but could be linked to genetics or environmental factors like radiation.

The boy is believed to have had the teeth for a while, with his parents noting that he had complained of swelling in his jaw since the age of three. They said that nothing could be done, however, due to the boy’s inability to sit still and his refusal to allow doctors to examine him.

The case, according to Dr. P. Senthilnathan, head of the hospital's Oral and Maxillofacial Surgery Department and one of two surgeons who operated on the boy, is a prime example of the limited awareness around the importance of addressing dental and oral issues early, especially in rural settings.

"Earlier, things like not as many dentists, lack of education, poverty, meant that there was not as much awareness,” he told CNN. "You can see people in cities have better awareness, but people who are in rural areas are not as educated or able to afford good dental health."

Ravindranath has recovered and now has 21 teeth.