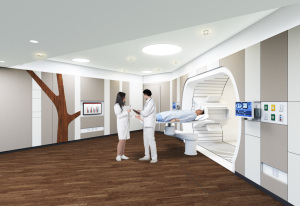 The $159 million project will expand the building to more than 160,000 square feet, enabling it to take in more patients who require treatment with the advanced form of radiotherapy.

"We are excited to more than double our IMPT capacity in the new center to approximate 100 patient treatments per day, better ensuring timely patient access so that more patients can benefit from this technology," G. Brandon Gunn, associate medical director of the Proton Therapy Center at the University of Texas MD Anderson Cancer Center, told HCB News.

The expansion will include eight radiation therapy systems developed by Hitachi that rotate at 360 degrees around patients to deliver therapy to the exact area that requires treatment, a technique known as intensity-modulated proton therapy.

The center will also install an additional synchrotron, the accelerator used to create proton beams, and rooms with improved, modern designs for better patient experiences.

"One of the four treatment rooms in our current center is IMPT capable and is in very high demand by our patients and physicians. Proton therapy expansion at MD Anderson will greatly increase patient access to IMPT, as all four treatment rooms in the new center will be equipped with this advanced technology, more than doubling our current IMPT capacity," said Gunn. "The new center will feature numerous technical advancements that will further improve proton therapy delivery and precision, such as in-room CT volumetric imaging and tumor motion tracking."

The center experienced a nearly 11 percent increase from 2017 to 2018 in the number of patients who underwent proton therapy. The expansion of the 73,500-square-foot facility is expected to provide more accessibility to patients who would benefit greatly from PT. This includes those with cancer of the head and neck, which currently make up 38 percent of the cases at MD Anderson; prostate, lung, liver, and brain, and a range of pediatric cancers.

The expansion is estimated to be completed by November 2023. Construction will be carried out by Gilbane Building Company.