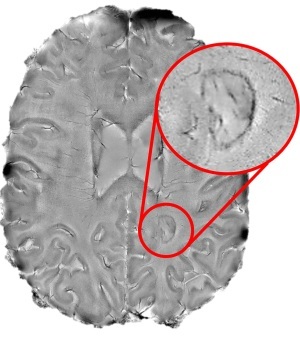 Dark rimmed spots may indicate
a likelihood of developing a severe
form of MS
Researchers at the National Institutes of Health may have found a new indication of an aggressive form of multiple sclerosis based on spots found on the brains of such patients.

Indicative of continuous, "smoldering" inflammation, the dark rimmed marks are called chronic active lesions, and those with a higher numbers of them are more likely to develop a severe and disabling form of the condition, according to the team, which used a Siemens Magnetom 7-tesla MR scanner to identify the rims, which are difficult to detect.

“With 7-tesla, we can get brain images at higher resolution (up to 0.2 mm in plane) and with an enhanced contrast (by using the higher susceptibility differences between tissues),” Dr. Martina Absinta, the post-doctoral fellow who lead these studies while working at the NIH's National Institute of Neurological Disorders and Stroke, told HCB News.

MR scans can help diagnose patients by identifying the lesions produced by the immune system’s attacks, which appear as spots on the patient’s brain. Though some heal completely or partially, others remain, with rimmed ones appearing as actively expanding, or "smoldering", for a number of years. The difficulty in identifying these lesions has, until recently, prevented clinicians from fully understanding the impact they have on disease progression.

More than two million suffer from MS worldwide, an incurable disease in which the immune system attacks the myelin around nerve cells in a person’s brain and spinal cord. People with this condition can experience blurred or double vision; problems with muscle strength, balance and coordination; and abnormal sensations. And while anti-inflammatory medications can alleviate symptoms, a subset of these patients will acquire a longer-lasting, progressive form of the disease, which can lead to paralysis, loss of bladder control, and problems with attention, thinking and memory.

The researchers scanned the brains of 192 MS patients and were able to accurately identify the lesions by their darkened outer rims and based on descriptions listed in previous studies. Regardless of the treatment they were on, 56 percent had at least one rimmed lesion, while 44 percent had only rimless ones. Another 34 percent had one to three rimmed lesions, and 22 percent had four or more.

Comparing the scans to the neurological examinations that patients received upon enrolling in the trial, the team found that those with four or more lesions were 1.6 times more likely to be diagnosed with progressive MS than those without rimmed lesions. Such patients also developed motor and cognitive disabilities at a younger age than those with no rimmed lesions, and had less white matter and smaller basal ganglia in key parts of their brains.

Absinta notes that the technique can be replicated on 3-tesla systems, and that the findings point to the need for MS research to focus on new treatments, besides anti-inflammatory drugs, that target the brain's unique immune system, particularly a type of brain cell called microglia.

“There’s a lucky convergence of research between MS and other neurological diseases, such as neurodegeneration (Alzheimer’s, Parkinson’s) and even stroke. Scientists are realizing that there is substantial inflammation in all of these diseases, and that microglia — which normally are there to defend the brain from infection and injury — may be playing a negative role,” she said. “We’re hoping that this convergence will spur development of new treatment approaches, and we think that early testing of new medications might be most easily done in MS because we have good imaging measures, such as the rim plaques.”

The findings were published in the journal, JAMA Neurology.