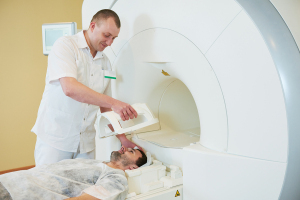 Pre-biopsy MR scans were able to
better detect prostate cancers that
likely requires treatment than biopsies
alone
Prostate cancer patients may want to consider an MR scan prior to undergoing a standard ultrasound guided biopsy, according to a new study.

Researchers in the U.K. and Canada claim that use of a pre-biopsy MR exam combined with targeted prostate biopsy is better able to detect prostate cancers that likely require treatment and lead to fewer biopsy cores taken per procedure than a biopsy alone, as well as fewer misleading biopsy results.

"Multiparametric MR scans can visualize suspicious lesions within the prostate gland ahead of biopsy, and these lesions may potentially be regions of clinically significant prostate cancer. These regions can then be specifically targeted at ultrasound-guided needle biopsy," Dr Richard Bryant, associate professor of urology at the Nuffield Department of Surgical Sciences at the University of Oxford, and the department of urology at Churchill Hospital of Oxford University Hospitals NHS Foundation Trust, told HCB News. "In the standard ultrasound-guided needle biopsy procedure without a prior MR, the biopsies are simply taken systematically without any specific targeting, particularly as the ultrasound is used predominantly for anatomical guidance to ensure the prostate is sampled."

The findings are based on a conglomeration of seven studies which, together, consisted of 2,582 patients, with researchers focusing on those who had never undergone a prostate biopsy before.

Despite the differences among the studies, the practice of performing MR scans on prostate cancer patients was found to identify cancers that required more immediate attention, and reduced side effects incurred from biopsies, which cannot always identify the severity of a cancer.

The National Institute for Health and Care Excellence also recommends it, which has helped increase the number of providers administrating it as part of the clinical process for diagnosing prostate cancer. This rise, however, has not yet reached other countries.

"I think a first step would be for official clinical guidelines to recommend the use of pre-biopsy mpMR in prostate cancer diagnosis," said Bryant. "This approach has been adopted by NICE in the UK, and by the European Association of Urologists, following recent level one evidence of the benefits of adopting pre-biopsy mpMR such as the landmark PRECISION randomized clinical trial in the U.K."

Researchers involved hail from the National Institute for Health Research (NIHR), which led the study, and the Universities of Bristol, Ottawa, Exeter and Oxford.

The findings were published in JAMA Network Open.