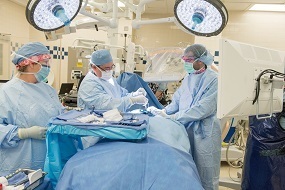 This procedure eliminates the need for open, invasive surgery by ablating the cancer cells adjacent to the spine. This way, the patients recover in a matter of days rather than months.

The surgery team at Henry Ford used Varian Medical Systems’ Edge Radiosurgery System to perform the procedure, which received FDA approval in 2013. It features a treatment couch with six axes of motion so the tumor can be targeted from various angles.

"The learning curve is steep,” Dr. Ian Lee, the neurosurgeon who performed the procedure, told HCB News. “It does require a lot of specialized equipment and close integration between multiple personnel. At one point, I counted 20 people in the room.”

His patient, Jacquelyn Donley, was diagnosed with lung cancer in 2013. The left lobe of her lung was removed and then she underwent radiation and chemotherapy treatment.

In 2017 the cancer had returned and metastasized to her spine. These patients are traditionally treated with stereotactic radiation, but if the tumor touches the spine then they have to first undergo open surgery to separate it.

In Donley’s case, she already received the maximum cumulative dose of radiation to the spine and she wasn’t a strong candidate for open surgery. However, all of that made her an ideal candidate for SLITT.

Henry Ford has offered laser ablation for brain cancer since 2013. Lee decided it was time to also treat the type of cancer Donley suffered with, and she is now in remission and has been covering well as a result.

Lee believes that SLITT may one day be used to treat other ailments.

“It's possible that it could be used for other tumor types in the spine, or possibly other bones or even soft tissue,” he said. “The value of the technique is in the MR thermometry, which allows for real-time measurement of temperature, so as to not injure adjacent important structures.”