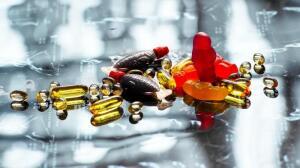 You can save money and make MR a friendlier experience for kids by using cheap everyday items for markers, says a Queensland University of Technology (QUT) study.

The researchers used tiny objects like jelly-baby lollipops and plastic fish-shaped soy sauce containers in their experiment and found them to be “visible, effective MR markers, when placed on a patient’s skin, to pinpoint specific anatomical areas or pathologies being scanned,” they reported on the British Medical Journal’s BMJ Open site.

“Single-use commercial markers cost between (Australian) $6 and $10 each, and for our sleep posture study we had 50 participants, and we needed 50 markers for each participant, which made the cost prohibitive,” senior research fellow Dr. Paige Little, from the QUT Biomechanics and Spine Research Group, said in a university report on her work.

“While makeshift markers of various types, including fish oil capsules, have been anecdotally trialled in clinical radiology departments over the years, we couldn’t find a study in the scientific literature, so we did our own trial,” she explained.

Her team tested a total of 17 items, including different lollipops, coffee beans, vitamin tablets and capsules, and the capped fish-shaped soy sauce containers from sushi restaurants. The items were scanned at the Mater Medical Imaging center on the thigh of a volunteer from the research team.

“The visibility of some of the items, like the coffee bean, was poor, but overall we found the vitamin D capsule proved to be the best substitute for a commercial marker for all tests, and particularly good for smaller areas of the body like fingers and toes,” said Little, who noted that the lollipops, soy sauce containers and fish-oil capsules were also “viable alternatives for some, although not all, of the MR sequences.”

The bottom line is that the items are cheap and reliable alternatives to commercial markers, and that besides saving money, the use of everyday items can help make the procedures less frightening for kids.

Fears associated with scans are a constant challenge in pediatric imaging.

At the UCSF Benioff Children’s Hospital the challenge has been addressed by creating a nautical themed environment in the MR suite, complete with a “boat”, surrounded by “scuba tanks” and a backdrop that looks like San Francisco’s Fisherman’s Wharf — a make-believe approach that can allow scans without anesthesia in those patients who may have required it before.

“Any time that you’re not spending trying to convince a kid to hop onto an MR table and cooperate, the quicker a scan can go. We’ve spent a lot of time building these patient experiences and it worked, right out of the gate. I’ll always remember that moment,” Dr. John MacKenzie, associate professor of radiology and chief of pediatric radiology at UCSF Benioff, told HCB News in March.

The boat, in reality, was the MR scanner, surrounded by a painted picture of the San Francisco Wharf area and oxygen and anesthesia tanks designed to look like scuba gear. All are elements of the marina theme, one of many designs offered by GE Healthcare’s Adventure Series, which transforms MR rooms into environments in which imaging is less scary and more inviting.