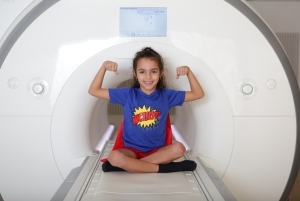 There's a superhero at Weill Cornell Medicine and NewYork-Presbyterian able to entertain a young patient — and save an MR session.

Using an MRI-am-a-Hero kit, which includes a one-of-a-kind comic book, cape, Captain America and Iron Man plush toys, an educational DVD and a mini-model of a Siemens Healthineers MR scanner, can help young patients get through an often-challenging session and cut the need for sedation, researchers have now reported in the Journal of the American College of Radiology.

“This program can eliminate the need to undergo sedation, which has its own potential side effects to the child and can also add to the anxiety of the exam, have post effects, and certainly increases the costs,” said senior author Dr. Robert Min, chair of radiology and the John A. Evans, M.D. Professor of Radiology at Weill Cornell Medicine and radiologist-in-chief at NewYork-Presbyterian/Weill Cornell Medical Center.

The investigators found that the use of the kit cut outpatient pediatric MR sedation rates by 5.6 percent for patients ages 4–15.

The program began in 2014 when Min began “brainstorming” about ways to help kids get through MR exams. “Kids have a much greater capacity to learn than adults give them credit for,” he said.

He joined with Marvel Custom Solutions to create a comic book about Captain America getting an MR exam, and with Siemens Healthineers, to create the kit.

The patients get to choose a pair of shorts and a T-shirt emblazoned with superheros, instead of a typical gown, and get a plush toy of Captain America or Iron Man to keep. After the scan, they get a cape to take home as well.

The study, coauthored by radiology resident Dr. Helen Xu, revealed that sedation rates reduced from 22.9 percent to 17.3 percent, based on 4,234 MR cases from January 2013 to October 2017. The odds of an MR being performed with sedation are 40 percent less since the program started. The program was most successful with patients ages 4–7, followed by patients ages 8–11. The effect was not statistically significant for patients ages 12–15.

“This environment and this program allows kids to complete their exams in a fun and non-threatening way,” said study co-author Rachel Cavaliere, a pediatric radiology child-life specialist at Weill Cornell Imaging at NewYork-Presbyterian. “When you’re prepared ahead of time and know what to expect, you’re going to be less scared and more compliant.”

This is not the only institution using such an approach for kids. At UCSF Benioff Children’s Hospital, for example, the MR suite has a nautical theme.

There the MR scanner has been disguised as a “boat”, and is surrounded by a painted picture of the San Francisco Wharf area and oxygen and anesthesia tanks designed to look like scuba gear. All are elements of the marina theme, one of many designs offered by GE Healthcare’s Adventure Series, which transforms MR rooms into environments in which imaging is less scary and more inviting.

Calling the sight of the sudden relaxation this caused in a nervous patient “a profound experience,” Dr. John MacKenzie, associate professor of radiology and chief of pediatric radiology at UCSF Benioff, told HCB News in March. “Any time that you’re not spending trying to convince a kid to hop onto an MR table and cooperate, the quicker a scan can go. We’ve spent a lot of time building these patient experiences and it worked, right out of the gate. I’ll always remember that moment.”