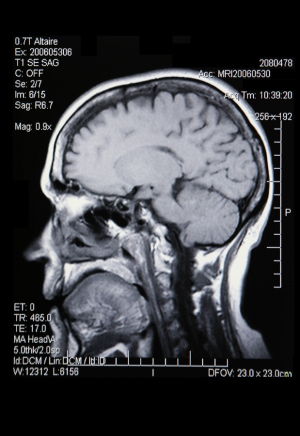 The Hyperfine POC MR system can be wheeled
to and perform scans at patient bedsides
Health technology incubator Hyperfine Research and the Yale School of Medicine are testing out a first-of-its-kind, portable MR scanner in the neuro intensive care unit at Yale New Haven Hospital in Connecticut.

The point-of-care system, designed by Hyperfine, is being deployed at the bedside of patients in what the company views as the first step toward creating greater access and availability of the modality for patients anywhere at any time.

"It is relatively light, portable and can be wheeled to the bedside. Unlike stationary MR systems, Hyperfine does not require separate shielding or electronics rooms," Mark Hughes, head of research and development at Hyperfine, told HCB News. "Hyperfine's system plugs into a standard wall outlet, consuming significantly less power. With a user-friendly, simple interface, the system can be operated from an iPad and does not require extensive training."

The research at YNHH is part of a two-year study being conducted in conjunction with the American Heart Association that aims to provide an alternative modality for unstable neurology intensive care unit patients who cannot be transported for routine MR scanning.

The first of any hospital to use the Hyperfine POC MR system, YNHH has produced 138 brain MR scans of 123 patients with known, acute neuropathology, as well as hemorrhages, ischemic stroke, hematomas, tumors, edema, and hydrocephalus. Anonymized versions of standard-of-care MR and CT scans have also been performed for comparisons.

The system can operate in any health system and has enabled YNHH to assess patients with multiple MR exams over a time span of hours to days.

"Since Hyperfine's system can move directly to the bedside and plug into a standard wall outlet, it may be useful in the emergency department for on-the-spot triage and diagnosis," said Hughes. "Hyperfine's system may also be valuable for imaging babies and children, or for imaging body parts like hands, elbows, knees, and feet. Hyperfine can bring MR to rural and lower-resource settings where there is no access to MR. The system is also a platform for AI applications and interventions."

The system will be unveiled to the public at the end of October at the American College of Emergency Physicians Annual Meeting in Denver. Hyperfine Portable POC MRI Device is currently 510(k)-pending and not available for sale in the U.S.

Preliminary findings are expected to be published in early 2020.