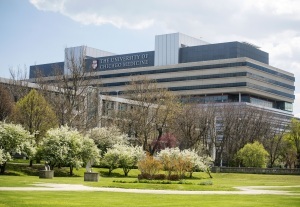 The NNOC/NNU is threatening a one-day strike by
nursing staff against UCMC over its position on
patient care support nurses
Registered nurses at the University of Chicago Medical Center are threatening to strike over a new staff proposal that they claim compromises patient safety.

“The Union’s statements accusing us of planning to lay off 24 patient care support nurses are false,” Debra Albert, UCMC's chief nursing officer, told HCB News. “In fact, as part of our many compromises to try to avoid a second strike, we proposed adding more than 40 new positions over the next 18 months to provide nurses more support; and transitioning the 24 patient care support nurses into these and other new roles, all of which are designed to provide more support at the bedside for frontline nurses.”

PCSNs are a group of nurses who offer resources and support to staff nurses on floor. These services include putting in and filling IVs when other nurses cannot; transporting patients for testing; and in some situations, taking control of the patient's entire care for a floor nurse.

The controversy around the position stems from ongoing negotiations on a number of issues between the NNOC/NNU and the hospital, with UCMC asserting that it proposed a number of compromises to the union’s demands that included an agreement to not lay off any PCSNs. It also said it would abide by the union’s contract language, which dictates how it should decide which units would receive these new support positions.

Elaine Mister, a nurse case manager at UCMC, says the proposals by the hospital would oversee the transition of PCSNs to an IV team over the course of 18 months. She also asserts that some of the PCSNs carry more experience than the floor nurses and offer them guidance.

"You are actually going to decrease your scope of practice from being able to offer assistance to a nurse with her patient for any type of screening, radiology, testing, MRs," she told HCB News. "If a patient comes in for a broken leg and now has had a stroke, that patient needs extra care and needs to be moved to an ICU bed. While we’re waiting for that patient to be sent to an ICU bed, that patient care support nurse could have taken over for that nurse. Now you’re just going to have her start IVs. We are more than that."
1(current)
2