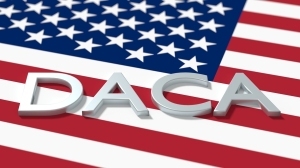 DACA changes could hit healthcare hard, say some healthcare experts, as the Supreme Court has just heard oral arguments in litigation that could end the program.

If the Supreme Court cancels the Deferred Action for Childhood Arrival (DACA) program as many as 27,000 health system professionals depending on that immigration policy could be affected — a result that could have “devastating effects” of those they serve, according to an amicus brief filed in the case.

AAMC estimates hold that about $5 million has already been put into training DACA recipients alone.

“If those [physician] trainees and physicians retain their work eligibility, each will care for an average of between 1,533 and 4,600 patients a year. Together, over the course of their careers, they will touch the lives of 1.7 to 5.1 million U.S. patients,” the brief stated. Time is also lost as it takes about 10 years to train a doctor.

Medical schools are also caught in the middle of the issue as 65 of the institutions had policies in place by 2019 that allowed DACA-protected people to enroll.

The issue led the University of California and others to sue the government over DACA in 2018. That suit has been consolidated by the Supreme Court with another pair of cases, Trump v. NAACP and McAleenan v. Vidal, and an opinion is now expected by June, 2020.

The AMA Litigation Center also highlighted the larger financial impact of killing DACA. Many of the DACA healthcare workers practice in underserved areas and the center estimates that each DACA physician could generate about $3.2 million of economic activity.

The decision will surely have political repercussions.

"It does present a political challenge," Mark Krikorian, executive director of the Center for Immigration Studies, told USA Today. "They are going to have to navigate it very carefully."

According to the paper, the court appeared split along ideological lines during the oral arguments last week, with conservatives seeming to favor the administration and liberals opposing the arguments. A split could drop the decision squarely into the lap of Chief Justice John Roberts.

As for the best strategy for the administration, while it generally likes confrontation, in this situation, waiting might just be the best policy. "I just think punting to after the election might be the least risky option," Krikorian said. "They can say, 'All the more reason to vote for the president’s reelection and Republican members of Congress, so we can have a balanced deal in 2021 with a new Congress instead of rush to do something now.'”