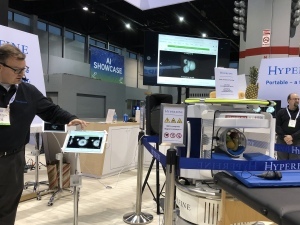 For the first time in RSNA history, healthcare startup Hyperfine performed an MR scan on the show floor.

While the company could only scan a collection of fruit and not people at the booth due to RSNA's policy, the demonstration highlighted the uniqueness of the portable point-⁠of-⁠care system, which has a .064 Tesla magnet, significantly lower than that of a standard system.

The system requires no shielding and the safety zone on the show floor consisted of four stanchions surrounding the bore of the portable scanner.

The idea behind the system is to scan patients who are too fragile to move at the bedside, to examine ER patients who complain of headache or dizziness sooner — diagnosing issues such as ischemic stroke, hematoma and hydrocephalus — and to create easier access in rural settings.

At some facilities, such as rehabilitation centers, “patients may wait hours for a conventional MRI,” Brian Welch, director of clinical science for Hyperfine, told HCB News during an interview on the show floor at McCormick Place.

The scanner has generated a lot of interest, particularly from emergency room doctors, Welch said. The 510(k)-pending scanners will have a lower price point than a conventional scanner — less than six figures, which Welch said is comparable to a high-end ultrasound cart.

The company has five scanners being used for research at five facilities, including in the neuro intensive care unit at Yale New Haven Hospital.

Hyperfine, founded by Dr. Jonathan Rothberg in 2014, is part of the Connecticut-based 4Catalyzer health technology incubator. Another company that is part of the same incubator, Butterfly Network, developed a handheld ultrasound that's used with an iPhone.

Dr. John Martin, chief medical officer of Hyperfine Research, said they have used the MR scanner while at the same time holding a Butterfly ultrasound transducer right up against a patient.