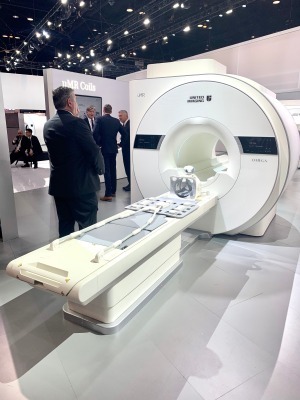 Named uMR Omega, the scanner is the world’s first ultra-wide 75-cm MR bore, making it the widest on the market according to the company, which plans to release it in the U.S. market first. Its use is expected to provide MR diagnostic exams for broad-shouldered and bariatric patients who are often limited in access to the modality due to limitations of typical bore sizes, table weight capacity and scanner capabilities.

“A larger patient population, the fact that the level of obesity in our country is unfortunately higher than global averages, and claustrophobia are huge concerns for practitioners that have patients who come in and start the day but can’t finish the exam. We’re targeting those things.”

The obesity rate in the U.S. alone is close to 40 percent, an increase from 34-35 percent between 2005 and 2012. Those who are "extremely obese" make up eight percent of the population and are continuing to increase in numbers. Meanwhile, five to seven percent of the population are estimated to be claustrophobic, making the tight spaces inside MR scanners anxiety triggers.

uMR hosts not just a wider gantry, but a table weight capacity of 680 lbs, another first in MR imaging, as well as improved off-center imaging applications. It extends the imaging volume of a typical MR scanner from a 50x50x50 cm field of view to one that is 60x60x50 cm. This is made possible by the high homogeneity of its magnets and a 70 cm coil in the scanner that is designed to be right to left in direction for imaging larger patients.

In addition to bariatric and claustrophobic patients, the system is expected to be an option for pregnant women in need of scans children whose mothers can lie with them in the bore to help them stay still, and rural areas where the availability of imaging modalities is lacking.

“One of the limiting areas for bariatric patients would be body exams in the past, so I think it should enable more scans across the whole body of a larger patient. The system is equipped with a broad range of applications that everyone would expect from a high-end 3T. That scanner, along with our mobile PET/CT, is really designed to reach rural markets in the U.S. Both of these innovations actually are, first and foremost, dedicated to the U.S. market.”

The design of the bore was based on consultations with bariatric caregivers. UIH referenced bariatric wheelchairs to choose the increased weight capacity and bore size specifications.