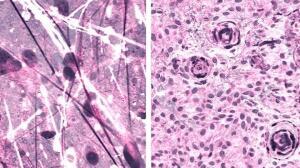 Using a NIO Imaging System, the scientists applied an imaging technique known as stimulated Raman histology (SRH) and performed AI-based real-time intraoperative diagnoses of brain tumors. They then compared the accuracy to that of manual interpretations of conventional histological images performed by pathologists, finding both to be similar to one another.

"The brain is made up primarily of gray matter (primarily neurons and supporting cells) and white matter (primarily axons — the wire-like processes that neurons send out to other neurons and muscles in body)," Dr. Daniel Orringer, associate professor of neurosurgery at NYU Langone Health, told HCB News. "Axons, in particular, are very hard to see with conventional histology. On the other hand, SRH reveals axons particularly well because it is sensitive to the lipids that line them. Axons become really important in differentiating tumors that arise from the brain (gliomas, glioblastoma) and those that have spread to the brain (metastatic cancer) or compress the brain (meningioma)."

In addition to allowing surgeons to see things that would otherwise be invisible, the technology allows surgeons to improve speed and accuracy in the OR and reduce the risk of misdiagnosis.

The researchers applied AI to process and analyze the microscopic images, producing results and allowing surgeons to view a predicted brain tumor diagnosis in under two and a half minutes. Following the resection, the same technology was used to accurately detect and remove the otherwise undetectable tumor.

Researchers developed the AI tool by training a deep convolution neural network (CNN) with more than 2.5 million samples from 415 patients to classify tissue into 13 histological categories that represent the most common brain tumors, including malignant gliomas, lymphoma, metastatic tumors, and meningioma.
1(current)
2