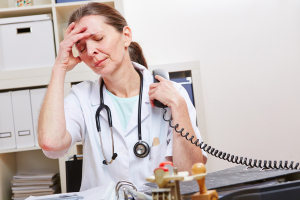 Almost half of doctors born in Generation X reported feeling burned out
About 42 percent of U.S. physicians are burned out, while almost 50 percent are willing to take a pay cut if it means better hours and more time with family and friends.

Those are the findings made by Medscape in its National Physician & Suicide Report 2020: The Generational Divide. The report found feelings of burnout among almost half of doctors born in the Generation X era (ages 40-54), as well as 39 percent of baby boomers (55-73) and 38 percent of millennials (25-39). Most of Generation X attributes burnout mainly to the number of bureaucratic tasks they face, too many hours at work and a lack of respect from bosses and colleagues.

“Mid-career is typically the time of highest burnout, which is where Gen Xers are in their career trajectories,” said Dr. Carol Bernstein, vice chair for faculty development and well-being at Montefiore Medical Center/Albert Einstein College of Medicine, in the survey. “In addition, I suspect that group is juggling multiple jobs outside of work, including caring for children as well as elderly parents, and working as well as planning for retirement. Role strain and transition periods also increase stress.”

Of all physicians, 55 percent blamed too many administrative tasks such as charting and paperwork followed by too many hours working as the main causes of burnout, which is described in the report as ‘long-term, unresolved, job-related stress leading to exhaustion, cynicism, detachment from job responsibilities, and lacking a sense of personal accomplishments.

While feelings of burnout declined from 46 percent in 2015 to 42 percent in 2019, the condition is still prevalent, with the highest rates seen among urologists (54 percent), neurologists (50 percent), and nephrologists (49 percent). Radiology tied with family medicine, Ob/Gyn, and diabetes and endocrinology for fourth place, followed by infectious diseases in fifth. Lowest rates were found among orthopedists (34 percent), ophthalmologists (30 percent), and public health and preventative medicine specialists (29 percent).

Close to 40 percent of all respondents said burnout made them prone to easily become exasperated with patients and nearly 20 percent said they expressed frustration in front of their patients. Almost three-quarters across all generations reported an impact on their personal relationships, and nearly 20 percent reported feeling depressed. Close to a quarter admitted to having had suicidal thoughts, but only about one percent actually attempted to kill themselves.
1(current)
2