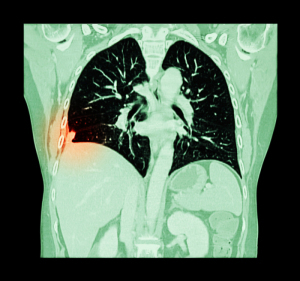 Low-dose CT screening for lung cancer reduces deaths among current and former heavy smokers, according to a new study published Wednesday that adds to the evidence supporting wider testing.

The study by European researchers in the Netherlands and Belgium appeared online at the news site of the New England Journal of Medicine.

“With this result, we can be even more convinced that it works and that the harm-benefit ratio for the group as a whole is quite good,” Harry de Koning, a professor of public health at Erasmus University Medical Center in Rotterdam and lead author on the study stated, according to the Wall Street Journal.

Scanning for heavy smokers cut deaths from lung cancer by 24 percent for men and 33 percent for women over a 10-year period.

“It’s essentially confirming that CT lung screening is incredibly powerful at detecting early stage lung cancer,” Andrea McKee, the chair of radiation oncology at Lahey Hospital & Medical Center in Burlington, Massachusetts, told the WSJ, stressing that “these patients can be cured, and that’s something a lot of people don’t get because lung cancer has been so deadly.” McKee wasn't part of the study.

CT screening for lung cancer hasn't found a widespread use at this point, in part, because despite a 2011 U.S. study that showed it cut smokers' lung cancer deaths by 20 percent versus X-rays, it can also lead to false positives and unneeded procedures.

The Dutch-Belgian Randomized Lung Cancer Screening (NELSON) study followed over 15,000 heavy former or present smokers ages 50 to 74 for a decade. Patients either were screened or were not. In those screened it detected 59 percent of the lung cancers that developed – and found them earlier.

“It further validates what has already been shown," Jacob Sands, a thoracic oncologist at Dana-Farber Cancer Institute in Boston, who wasn't part of the study, told the WSJ. "Lung screening prevents death from lung cancer."

False positives were also lower – just 1.2 percent of male participants had them — that is, 467 out of 22,600 male scans rated follow up, leading to identification of 203 lung cancers.

The U.S. Preventive Services Task Force is looking at the study and its guidelines for possible updating, its chairperson, Douglas Owens, told the Journal.

In October, 2018, earlier reports from the study were revealed at the International Association for the Study of Lung Cancer (IASLC) 19th World Conference on Lung Cancer (WCLC).

“In screening, you’re not dealing with patients with lung cancer but people at risk for the disease,” Dr. James Mulshine, professor of internal medicine at Rush University in Chicago and chair of the Early Detection and Screening Committee of the IASLC, told HCB News at the time. “In this pre-disease setting, we want to reduce the harm of medical radiation to as low as possible. In the last decade, the medical industry has shown it can produce extraordinary, high-quality imaging at very low dose so that the risk to this asymptomatic subject population is quite negligible. That’s why we specify low dose in this setting. We want to incur as little difficulty for these individuals as possible.”