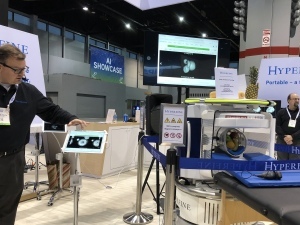 The system, which is equipped with a .064 Tesla magnet — significantly lower than that of a standard scanner — requires no shielding, was designed with the nearly 90% of the world lacking access to MR in mind and may also prove beneficial for patients that are too fragile to move from the bedside, as well as ER patients who complain of headaches or dizziness. It is controlled via a wireless tablet, and is expected to benefit a number of specialties, says Chris Ward, head of marketing for Hyperfine.

"In hospitals, the first applications most people think of is pediatrics and avoiding the ionizing radiation of CT," he told HCB News. "Another is intensive care where MR would be used if only it were readily accessible for some of the sickest, most fragile and hard-to-transport patients in the hospital. We've had a big reception from emergency medicine where time matters and MR essentially goes under-ordered because it is typically far away from the ED and it is often backlogged. From there, we can extend to Hyperfine use outside of the hospital such as urgent care clinics, naval and cruise ships at sea, sports medicine applications and more."

Prior to its approval by the FDA, thousands of scans were performed with the system as part of investigational partnerships at Yale New Haven University, Penn Medicine, Good Samaritan Hospital Long Island, New York Presbyterian Brooklyn Methodist Hospital, and Brown University.

A preliminary study funded by Hyperfine and the American Heart Association Collaborative Science Award found that portable, low-field MR systems provide safe and practical ways for obtaining accurate brain images at a patient’s bedside. Eighty-five stroke patients received such care from the Hyperfine system within seven days of the onset of their symptoms, with exam time averaging about 30 minutes. Most patients completed the entire exam, with the exception of five who could not fit into the 30-centimeter opening of the MR machine. Six patients also experienced claustrophobia, which halted their tests. No significant adverse events were reported, however, and no metals had to be removed from the room either, due to the device’s low-field magnet.
1(current)
2