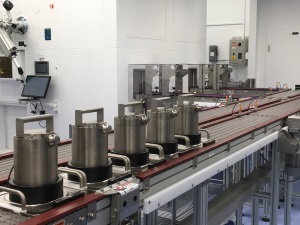 The aim in forming two extra lines is to increase the production and capacity of domestic, non-uranium-based Mo-99 available to U.S. healthcare providers for diagnostic imaging. The company currently manufactures the radioisotope in collaboration with the University of Missouri Research Reactor (MURR), which uses neutron capture technology. MURR converts natural Mo-98 into Mo-99, which is then processed into a radioactive Mo-99 solution.

"Frequent and sometimes prolonged disruptions in Mo-99 supply have been an ongoing issue for the U.S. healthcare system and are due to the fact that historically most Mo-99 came from aging nuclear reactors overseas, which are subject to outages and transportation interruptions," Stephen Merrick, president and chief executive officer of NorthStar, told HCB News. "With the advent of NorthStar's RadioGenix System [technetium-99m generator] being commercially available, the U.S. now has access to a reliable supply of technetium-99m derived from domestically produced and non-uranium-based Mo-99. The need to have an expanded facility in Columbia, Missouri demonstrates the unmet need."

Filling lines at NorthStar’s facility on the MURR campus transfer the radioactive Mo-99 into tungsten-shielded containers called source vessels. They are shipped to radiopharmacies that use the RadioGenix System, a generator approved in 2018, to convert the Mo-99 to technetium-99m (Tc-99m). Tc-99m is then used with radiopharmaceutical kits and injected into patients undergoing diagnostic imaging studies.

The FDA approved the filling lines through an expedited review of a prior approval supplement to the RadioGenix System (technetium Tc-99m generator) new drug application. The system has provided Tc-99m supplies for tens of thousands of patients’ diagnostic imaging studies, despite an ongoing shortage from suppliers that rely on legacy, uranium-based production methods.

The shift away from highly-enriched uranium (HEU)-based Mo-99 stems from fears that shipments of the substance could fall into the wrong hands and be sold or used in the proliferation of nuclear weapons. The U.S. Energy Department just last month opened up debates among a number of nuclear experts by suspending a two-year hold that would have prohibited the distribution of licenses for the exporting of weapons-grade uranium for the production of medical isotopes.

The approval is one of many efforts that NorthStar is undertaking to generate greater access among patients to nuclear diagnostic exams that rely on Tc-99m and other radiopharmaceuticals.

The filling lines were designed, built and installed by Von Gahlen, a manufacturer of products and components for the production and use of radionuclides in nuclear medicine.