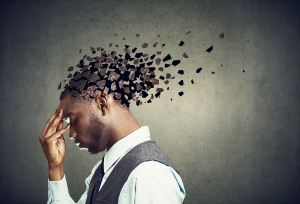 Together, the number of millennials and Generation Xers diagnosed during the five-year period increased by 373%, with the conditions more common in women, who make up 58% of those diagnosed. The report is titled, Early-Onset Dementia and Alzheimer's Rates Grow for Younger Americans and is part of the Blue Cross Blue Shield, The Health of America Report series.

“There are several factors that could be driving an increase in diagnosi,s rates with one of them being a heightened awareness of symptoms amongst providers and amongst consumers,” Brian Harvey, executive director for the Health of America report series at Blue Cross Blue Shield Association, told HCB News. “One focus area for research, moving forward, is around how to better diagnose and detect the signs and symptoms of early-onset dementia and Alzheimer's so that we can better get ahead of diagnosing and treating these diseases. In turn, this will ensure that we're doing everything we can to ensure the better health of our members — and of all Americans.”

The average age of those living with either form of dementia is 49. Studies of Alzheimer’s show that the disease begins in the brain years before clinical symptoms are noticed. 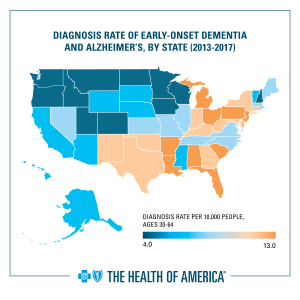 Increases in diagnoses raise the potential for greater economic consequences and mental stress among those who care for patients, with nearly 16 million family members and friends providing over 18 billion hours of unpaid care to people with Alzheimer’s disease in America. The costs of this care are estimated to amount to $221 billion, with much of the responsibility falling on women, who make up 63% of the caregiving subset.

The study found that diagnoses for either form of dementia rose by 373% among 30- to 44-year-olds and by 311% among 45-to-54 year olds. Those between 55 and 64 experienced an increase of 143%. Rates of diagnosis were higher in the east, south and parts of the Midwest, but lower in western states.
1(current)
2