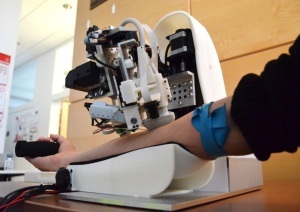 At least that’s what engineers at Rutgers are claiming about their newly developed system, adding that autonomous solutions like their image-guided robotic device may outperform clinicians in facilitating certain complex medical tasks.

Accessing veins, arteries and other blood vessels can be a challenge, but is often a time-critical first step in many diagnostic and therapeutic procedures, such as drawing blood, administering fluids and medications, introducing stents and monitoring health. An estimated 20 percent of procedures are affected by failures to facilitate this task. This leads to difficulties that increase in people with small, twisted, rolling or collapsed blood vessels, which are common conditions among pediatric, elderly, chronically ill and trauma patients.

Such patients as a result hold a first-stick accuracy rate below 50 percent and require at least five attempts, delaying treatment. In addition, the puncturing of major adjacent arteries, nerves or internal organs can lead to bleeding complications, the risk of which rises significantly with multiple attempts. In some cases, invasive approaches such as central venous and arterial access may be required if nearby blood vessels are inaccessible.

Combining artificial intelligence with near-infrared and ultrasound imaging, the robotic device is able to identify blood vessels from surrounding tissue, classify them and estimate their depth. It then uses motion tracing to accurately steer needles and catheters into the vessels with minimal supervision. Other research also supports its use for merging automated blood-drawing and downstream analysis of blood, along with other endeavors, says Yarmush.

"Not only can the device be used for patients, but it can also be modified to draw blood in rodents, a procedure that is extremely important for drug testing in animals in the pharmaceutical and biotech industries," he said.

Developers next plan to study the use of the device among a broader range of people, including those with normal and difficult blood vessels to access.

The lead author is Alvin Chen, who earned a doctorate at Rutgers. Co-authors include Max L. Balter and Timothy J. Maguire, who also earned doctorates at Rutgers under the supervision of Yarmush.

The results of their research were published in the journal, Nature Machine Intelligence.