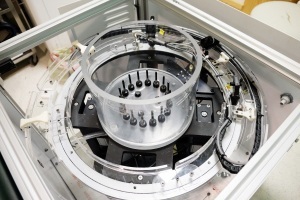 Dartmouth is building a multi-modal breast imaging platform that simultaneously uses Microwave and Magnetic Resonance Imaging (sMMRI) to enhance the clarity of images for more accurate diagnoses that reduce patient anxiety.
Engineers at Dartmouth are investigating the potential of a technique that combines two distinct imaging methods for the first time, that together could reduce unnecessary breast biopsies.

The project is carried out by an Academic Industry Partnership led by the engineers, who plan to develop a multi-modal breast imaging platform that simultaneously uses Microwave and Magnetic Resonance Imaging (sMMRI) to enhance the clarity of images so that physicians can make more accurate diagnoses that will reduce anxiety in patients. Helping to fund their endeavor is the National Cancer Institute, which has donated a $3 million grant to the project.

“An MR by itself produces very high-resolution images, but weak specificity, meaning it’s hard to determine if a suspicious area is malignant, while microwave imaging provides images with remarkable specificity, but suffers from poor resolution,” said multi-principal investigator (PI) Paul Meaney, a professor of engineering at Dartmouth, in a statement. “So, the idea is to combine the two methods to get a more accurate rendering of the tumor or lesion zone, but it’s very difficult to do.”

sMMRI is expected to not only cap the number of unnecessary biopsies of patients with suspicious mammograms, but also eliminate the use of gadolinium, an MR contrast agent that has become a controversial subject of debate within medical imaging circles due to its remaining in patient’s bodies, including their brains, sometimes for years after the patient has received it to undergo a scan.

The platform is expected to transmit one milliwatt of microwave power, which is equivalent to less than one-thousandth of what a smart phone emits. The AIP has conducted only a few preliminary but so far successful tests for proof of concept, and plans to improve on the prototypes and complete clinical trials over the five year period of the grant.

To do this, the Dartmouth team has partnered with Dartmouth-Hitchcock Medical Center and Canon subsidiary Quality Electrodynamics to create customary equipment, as standard equipment is inadequate for the project.

“The whole objective is to improve women’s health,” said Meaney. “I don’t think we’re going to cure everything, but if we can improve things, that would be great.”