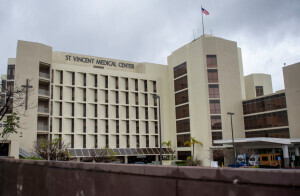 St. Vincent's Medical Center has been reopened to help relieve the surge of COVID-19 patients overwhelming nearby hospitals in Los Angeles. (Photo courtesy CEO Countywide Communications)
The COVID-19 pandemic has breathed life back into a shuttered hospital in downtown Los Angeles.

State, county and hospital leaders at Kaiser Permanente and Dignity Health reopened St. Vincent Medical Center Monday as The Los Angeles Surge Hospital to care solely for COVID-19 patients. Shut down since January, the hospital was revamped with essential equipment and supplies in just a matter of weeks, reported the Los Angeles Daily News.

“When we arrived just over two weeks ago, we found a few pieces of equipment but there were no services,” Julie Sprengel, Southwest division president for Dignity Health and acting CEO of the new surge hospital, told the newspaper. “As you can imagine, this was a huge undertaking for two different health systems to come together and open a new facility.”

The hospital will act as a source of relief for other medical facilities overwhelmed by the number of COVID-19 patients, and will offer a wider range of services than those of other field hospitals being set up, including an intensive care unit. The aim is to open the facility in phases and eventually accumulate enough physicians and staff members to tend to 266 beds.

Kaiser and Dignity have integrated lab equipment, IT services, pharmacy, linen and food services as part of the revitalization process. The state of California has provided personal protective equipment and ventilators, and is overseeing staffing, with some individuals likely to be hired from more than 86,000 who signed up for the state’s new Health Corps. A chief medical officer and chief nursing executive have already been appointed.

Los Angeles county has been afflicted with the largest concentration of COVID-19 cases so far in California, according to county officials, with slightly more than 700 hospitalized with the virus, as of Wednesday. Roughly 23% of the 7,530 confirmed cases in the state have required hospitalization at some point so far, with the number of deaths reaching 199, according to the LA Daily News.

Estimates Wednesday put open bed numbers at 1,548, including 247 ICU beds. The state is looking to secure another 50,000 hospital beds — most of which are at existing facilities — though LA officials have not said the specific number of beds they require.

St. Vincent Medical Center is owned by Verity Health System, which has leased it to the state. It initially planned to sell the property in the Westlake District of Los Angeles. The deal fell through, though the property is still for sale and may have found a buyer in Dr. Patrick Soon-Shiong, a surgeon and owner of the Los Angeles Times.
1(current)
2