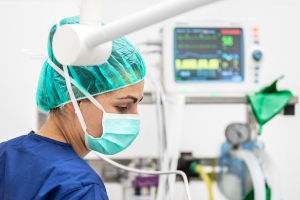 The New York State Nurses Association filed a suit Monday in the New York County Supreme Court, accusing the empire state’s Department of Health of failing to provide medical professionals with adequate protective equipment and of directing health workers infected with COVID-19 of returning to work sooner than recommended by the state. It also filed the suit against Montefiore Medical Center and Westchester Medical Center on behalf of its members employed at both locations, according to CNBC.

“More than seven in ten of our nurses are reporting exposure to COVID-19 and most are still untested,” NYSNA executive director Pat Kane said in a statement. “These lawsuits were filed to protect our nurses, our patients and our communities from grossly inadequate and negligent protections. We cannot allow these dangerous practices to continue.”

The complaints say at least 150 NYSNA members at Montefiore and 11 at Westchester Medical Center tested positive for COVID-19. The one against Montefiore claims at least eight members statewide have succumbed to the virus, while 84 have been hospitalized, though the union said the true impact is likely greater than reported due to limited testing capacity.

NYSNA describes conditions at both hospitals as “a war zone,” saying that health workers are “without essential tools they need to do their jobs and keep themselves safe.” It alleges that Montefiore and Westchester were unprepared to address the outbreak, put health workers in dangerous environments and failed to supply them with efficient protective equipment like masks and gowns.

“I began experiencing symptoms consistent with COVID-19, including cough and fever,” Montefiore nurse Pamela Brown-Richardson said in an affidavit. “I reported my symptoms to Montefiore and asked for testing. I was informed that Montefiore would not test me ... I obtained testing on my own ... [and] found out that I tested positive for COVID-19.”

Severe shortages in PPE have plagued clinicians and nurses across the U.S., with many resorting to making their own from everyday supplies to protect themselves from becoming infected.
1(current)
2