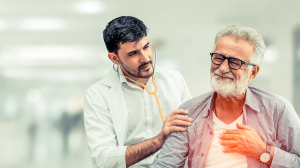 Analyzing visiter volume from more than 50,000 providers across the U.S., both observed decreases in all regions of the U.S. They also, however, found an increase in the adoption of telehealth visits.

“To decrease the risk of transmitting the virus to either patients or health care workers within their practice, providers are deferring elective and preventive visits, such as annual physicals,” said the researchers in their study. “When possible, they also are converting in-person visits to telemedicine visits. For their part, many patients are also avoiding visits because they do not want to leave their homes and become exposed.”

Data came from Phreesia clients, which include more than 1,600 provider organizations that represent more than 50,000 providers across all 50 states. These organizations typically rack up more than 50 million outpatient visits in a year, or one million in a week. Visits in the assessment were captured from February 1 through April 16, with the baseline defined as the week of March 1 to 7.

The highest declines were observed in the New England and Mid-Atlantic regions where areas like New York and Massachusetts have been hit hard by the virus.

Dips in visits were generally seen more among surgical and procedural specialties, with ophthalmology experiencing the worst decline at 79%. Following behind it were otolaryngology (75%); dermatology (73%); surgery (66%); and pulmonology (63%). Specialties such as adult primary care, obstetrics/gynecology, oncology, and behavioral health experienced less severe declines. While radiology was not included in the assessment, another study out of Yale University found outpatient imaging has declined by 70%.

Visits for children between seven and 17 went down the most by 71%, followed by those for adults, 75 and up, by 65%. An increase in telehealth visits, however, has offset the drop of in-person visits — though only partially — and nearly 30% of all visits at ambulatory practices are carried out now via telemedicine.

The researchers say that while providing important insights into the state of outpatient facilities during the pandemic, the findings do come with some limitations that may not make them representative of all practices nationwide or regionally.

Phreesia’s provider organizations include independent single-provider practices, multispecialty groups, Federally Qualified Health Centers, and large health systems. Data was retrieved from practice management and scheduling software; check-in information submitted via patients on the Phreesia platform, such as age; and selected data from the electronic health record, such as problem lists.

The findings were published on The Commonwealth Fund.