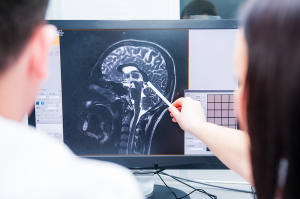 The discovery was made by neuroradiologists at Istanbul University-Cerrahpasa, who assert that the findings validate symptoms already identified for those with the disease, particularly symptoms related to the nervous system.

“Recent evidence highlights a relatively high percentage (36%) of central nervous system symptoms including headache, altered mental status, acute cerebrovascular disease and epilepsy in patients with COVID-19,” said the authors in their report. “The rate of neurological symptoms is higher in patients with more severe respiratory disease status. The relatively high percentage of neurologic symptoms is concordant with studies showing neurotropism of coronavirus.”

The purpose of the study was to evaluate the neurological condition of COVID-19 patients, as current literature on the subject is limited. Six percent of patients assessed experienced acute stroke, while another 15% had an altered state of mind. The authors believe one factor responsible is the cytokine storm, in which the body attacks its own cells and tissues in addition to fighting off the virus, according to WebMD.

All abnormalities were found in different areas of the brain, including the frontal lobe, parietal lobe, occipital lobe, temporal lobe, insular cortex and cingulate gyrus. Diagnoses that included autoimmune encephalitis, seizure, hypoglycemia and hypoxia were the main differentiator of the group, as it can be accompanied by cortical microhemorrhages and blood-brain barrier breakdown. The findings highlight that COVID-19 may result in infectious or autoimmune encephalitis due to its neurotropic potential.

"Certain viral and autoimmune encephalitis can have a specific pattern of involvement that is helpful to establish a differential list,” wrote the researchers. “However, non-specific imaging patterns in our series hinders achieving a specific diagnosis based on MR.”
1(current)
2