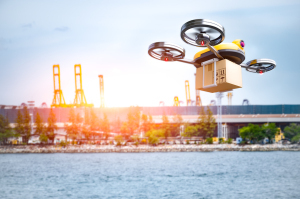 Novant Health is bringing in drones to transport PPE and medical supplies among its facilities throughout the COVID-19 pandemic.
A North Carolina hospital has become the first in the U.S. to incorporate emergency drones as part of its COVID-19 pandemic response.

Novant Health is using drones by Zipline, a national-scale, on-demand logistics service, to deliver PPE and other medical supplies to its frontline workers in the Charlotte, North Carolina, metro area.

“The COVID-19 pandemic has tasked us with being even more nimble and innovative in how we solve complex challenges,” said Angela Yochem, executive vice president and chief digital and technology officer for Novant Health, in a statement. “Fast-tracking our medical drone transport capability is just one example of how we’re pioneering in the healthcare industry, which is known for being resistant to change.”

The U.S. Federal Aviation Administration granted a Part 107 waiver to Novant Health to begin the operation, which will be launched as part of the North Carolina Department of Transportation’s (NCDOT’s) Unmanned Aircraft System Integration Pilot Program (IPP).

Two initial routes have been approved by the FAA, beginning with flights to Novant Health Huntersville Medical Center. Flights to initial facilities will be 20 to 30 mile round trips. Zipline’s drones have a round-trip range of more than 100 miles, allowing them to transport supplies from the Novant Health Logistics Center to other Novant Health facilities upon approval.

Drones will fly in Class-D controlled airspace, where all air traffic is actively managed by the FAA. They are expected to help Novant Health adapt to the ongoing pandemic and could potentially enhance testing, drug trials and vaccine distribution in the future.

“We’re likely in for a long-term fight against COVID-19. Using contactless drone logistics will be an important tool in that effort,” Zipline CEO Keller Rinaudo said in a statement. “The work underway here in North Carolina will provide the rest of the country with a blueprint for how to build the most resilient and responsive health care system possible.”

The use of drones for medical emergencies is currently being investigated in Sweden, with a drone system set up to deliver automated external defibrillators to the scene of cardiac arrests.

Novant Health plans to expand the partnership over the next two years beyond emergency operations in the Charlotte area to regular commercial operations upon approval under FAA Part 135 rule. The drones will be used to serve health facilities and eventually patients’ homes across states.

Novant Health operates 15 hospitals and close to 700 locations in the Southeast U.S.