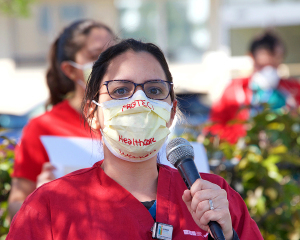 Registered nurses at HCA Healthcare plan to protest over what they say is a lack of available PPE and unsafe practices within their facilities.
Registered nurses at HCA Healthcare, a for-profit hospital chain in the U.S., are set to strike on Friday over short staffing that they say has led to issues that put their lives and those of patients at risk.

Around 1,000 nurses in California, represented by SEIU Local 121RN, issued a notice with intent to strike starting on June 15, following a breakdown in discussions over the issues, according to The Guardian.

“HCA has continuously not upheld their end of the mediation agreement of our nurses staying in ratio,” Erin McIntosh, a nurse in the code blue/rapid response department for six years at the HCA-owned Riverside Community Hospital (RCH) in Riverside, California, told The Guardian. “We’re striking June 26 through July 6 because they didn’t want to uphold our mediation agreement.”

The hospital initially agreed to increase staffing and end unsafe practices in March 2019. It chose, however, to end the agreement this year, despite nurses in February asking them for staffing, health and safety, infection control, and preparedness plans when COVID-19 first emerged in the U.S.

“After thoughtful consideration; the hospital and 121RN failed to come to an agreement and we declined to extend the current agreement,” a spokesperson for HCA told the Guardian in an email. “At this time we believe we are independently making significant progress around the topic of staffing at Riverside Community Hospital and believe that we can support our employees on our own without the influence of an outdated agreement.”

Registered nurses at 15 HCA hospitals recently took action back in April by documenting unsafe practices such as not working with proper protective equipment as a form of protest.

SEIU Local 121RN says all 121RN hospitals severely lack PPE, especially HCA hospitals. A union-wide member survey showed that wealthy HCA hospitals have some of the lowest marks for available PPE, and that they continue to ration items “aggressively” for “the surge,” regardless of the number becoming infected with the disease. Such decisions have led to fewer nurses being at work taking care of patients.

At RCH, hospital administrators, based on their response, expect fewer RNs to take care of more patients, even those with increased risk for COVID-19, according to the nurses who work there. Patient transfers from other hospitals also must be accepted, they say, even if RCH has reached capacity and even with insufficient staffing. And legally mandated rest breaks and meal periods are considered optional due to the lack of break nurses available. They also assert that the hospital sees RNs who have become sick with COVID-19 as dispensable casualties, having not done anything to increase staffing or PPE following the deaths of an environmental services worker and a lab technician.

Other complaints there include poor adherence to the OSHA-mandated directive to alert staff to possible exposure, with the hospital chain disciplining RNs who have alerted colleagues to exposure, and no response to a “Silent Protest for PPE” held by RCH nurses in April. In addition, the nurses say that RCH has resumed the unsafe practice of loading Trauma and Mobile Intensive Care Nurses with unrelated patient assignments, instead of reserving them for the most critical patients, for which they are specifically responsible.

“Long before nurses at Riverside delivered their strike notice, the hospital began recruiting nurses who will earn more than they did in their current jobs: up to $980 per shift, plus a $150 “show up” bonus, as well as other perks,” said SEIU Local 121RN in a statement. “ They can easily agree to staff the hospital appropriately so that nurses can fully focus on their patients, and patients can receive the care they need.”