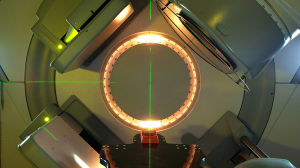 A 10-year study has confirmed that delivering larger doses of radiation once a week is just as safe as standard treatment for early-stage breast cancer in the long-term, with fewer side effects
A 10-year study indicates that larger amounts of radiation delivered in fewer doses to early-stage breast cancer patients following surgery are just as safe in the long-term as administering multiple small doses of radiotherapy.

Researchers at the Institute of Cancer Research, London assert that decreasing total dose of radiation and administering it in five large fractions once a week to such patients results in similarly low rates of side effects in the long-run as 25 daily doses administered over the same period of time. Their claim is based on the 10-year findings of the FAST trial.

“By reducing the number of daily doses of radiotherapy required from 15 doses in 3 weeks to 5 doses in a single week, this significantly reduces the workload in all radiotherapy centers, thereby reducing waiting times not just for breast cancer patients but for all other patients requiring radiotherapy," Dr. Navita Somaiah, clinician scientist and team leader in the division of radiotherapy and imaging at the Institute of Cancer Research told HCB News. "It also releases capacity for offering more complex radiotherapy where needed. There are significant health economic benefits to the NHS, including cost savings and improved patient experience.”

Launched in 2004, the FAST trial compared radiotherapy schedules of fewer but larger fractions overall, with total dose of radiation decreased. The aim was to determine which course could reduce side-effects of radiotherapy the most. The three-year results of the trial, published in 2011, showed reducing the number of radiotherapy fractions to five was possible and safe in the short-term. The 10-year findings now confirm it to be safe in the long-term, with side effects remaining low a decade later.

Researchers assessed the women annually for up to 10 years after their radiotherapy regimens ended, checking for side effects to healthy breast tissue such as hardening of the breast, swelling, skin reactions and changes in breast size.
1(current)
2