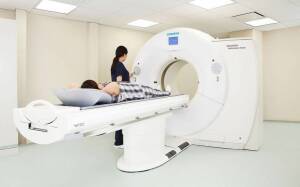 A new technique that splits full CT X-ray beams into beamlets could reduce radiation exposure while maintaining the same image quality. (Photo courtesy of UCL)
Researchers in London have developed a new technique for cutting a full X-ray beam during CT scans into thin beamlets.

The aim is to reduce the amount of radiation a patient is exposed to, while retaining the same quality of the image.

"This new method fixes two problems,” said professor Sandro Olivo of University College London Medical Physics & Biomedical Engineering and senior author of a study on the technique, in a statement. “It can be used to reduce the dose, but if deployed at the same dose it can increase the resolution of the image.”

The method utilizes a mask with tiny slits that is placed over an X-ray beam. The slits allow for the beam to be divided into beamlets. Olivo and his colleagues tested their approach by imaging an object that was moved in a cycloidal motion to ensure quick and complete irradiation. The cycloidal method adds a simultaneous backward and forward motion to the rotation.

They then compared the outcomes to those of conventional CT scanning methods, in which a sample rotates as a full beam is directed on to it. Image quality was retained at a reduced dose, and image resolution was also found to be sharper, due to the part of the scanner that “reads” the information from the X-ray now being able to locate where the information came from more precisely. The sharpness can be easily adjusted using masks with different-sized apertures, freeing the resolution from the constraints of the scanner’s hardware.

The authors conducted the study with a micro CT scanner and believe it could potentially be adapted for medical scanners at some point in the future. Such an innovation, they say, could reduce the amount of radiation that millions of patients are exposed to, as about five million CT scans are performed annually in the U.K. and 80 million are performed in the U.S. CT scanning is believed to account for a quarter of Americans’ total exposure to radiation.

"Our technique opens new possibilities for medical research, and we believe that it can be adjusted for use in medical scanners, helping to reduce a key source of radiation for people in many countries,” said Dr. Charlotte Hagen, also of UCL Medical Physics & Biomedical Engineering, first author of the paper and a member of the UCL Advanced X-Ray Imaging Group, in a statement.

The study was funded by the Royal Academy of Engineering and UK Research and Innovation (UKRI).

The findings were published in Physical Review Applied.