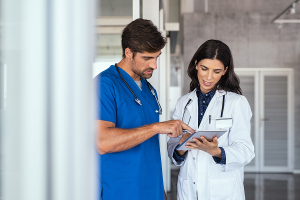 The first of two studies conducted by nonprofit DenseBreast-info.org (DB-I) has revealed gaps in the knowledge that radiologists and radiologic technologists have about dense breasts and screening.

The study, which was based on the results of DB-I’s CME/CE course, “Breast density: Why it Matters,” found a lack of understanding among 200 radiologists and 1,300 radiologic technologists in regard to breast density, breast cancer risk assessment, and breast cancer screening. The report is titled, Radiologic Technologist and Radiologist Knowledge Gaps about Breast Density Revealed by an Online Continuing Education Course.

"The advent of density inform laws has resulted in new discussions between imaging teams and patients," Robin Seitzman, Ph.D., MPH, director of education and epidemiology research for DenseBreast-info.org, told HCB News. "There seem to be limited educational resources to prepare them for these density-specific conversations. There are also nuances that may be overlooked, such as the fact that tomosynthesis is not equally effective in extremely dense breast tissue as it is in other density categories, and that not all risk models are appropriate for all purposes."

The online CME/CT course included a collection of pre-course demographic information, a monograph based on DB-I content, and a post-test to assess knowledge.

Nearly half of surveyed physicians and technologists wrongly thought aging increases a woman’s lifetime risk of developing breast cancer, and about one-third overestimated the ability of tomosynthesis to detect cancer when they said it was nearly equal to MR. A third also incorrectly thought that the Gail risk model - which is used to estimate a woman's risk of developing invasive breast cancer over the next five years and up to age 90 - should be used to determine if a woman is high risk to the point where she should be recommended for MR or genetic testing. In addition, about one-third of physicians and about half of technologists were unaware that screening MR should be recommended for a 29-year-old woman if she has a family history of the disease-causing BRCA1/2 mutation(s).

Regarding breast density, 523 of 1,190 technologists erroneously believed the most commonly used risk model calculators included breast density as a risk factor. Those in practice for 10 years or less were more than 50% likely to believe this misperception than those practicing for more than 20 years. Physicians showed no knowledge gap here.
1(current)
2
3