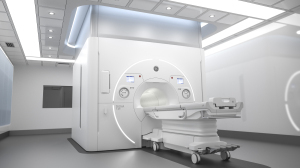 The SIGNA 7.0T MR system is expected to enhance imaging for conditions such as Alzheimer's disease and mild TBI, as well as extremities.
GE Healthcare unveiled its SIGNA 7T MR system at this year’s virtual International Society for Magnetic Resonance in Medicine (ISMRM) meeting.

“The integration of the new MR platform into the SIGNA 7T system has resulted in outstanding image quality,” said Garry Gold, professor of radiology at Stanford University, in a statement. “Stanford has been working with GE at the 7T field strength for over 15 years and we expect this new platform to be transformative for the next generation of scientists, researchers and clinicians.”

The system is designed to detect subtle structures that may hold significant information for clinicians and researchers alike.

It incorporates UltraG gradient technology, GE’s most powerful, whole-body gradient coil for enabling ultra-high field imaging speed and resolution. It also has the familiarity of SIGNA Works applications platform, which provides clinicians with access to state-of-the art applications such as deep learning-based platform tools like AIR x brain for automated slice positioning and Silent MR imaging. Another feature is its Precision RF transmit and receive architecture, which improves image quality and research flexibility.

In addition to the SIGNA 7T, GE showcased two of its investigational devices, the SIGNA ultra-high performance (UHP) 3.0T and the head-only MAGNUS gradients. SIGNA UHP 3.0T improves visualization of microstructure changes that arise from conditions such as Alzheimer’s and Parkinson’s disease. The whole-body system shares many of the same high-performance components as the SIGNA 7T but operates at a lower field strength, making it more affordable for research sites.

The MAGNUS (Microstructure Anatomy Gradient for Neuroimaging with Ultrafast Scanning) gradient coils, meanwhile, are part of a new study between GE Research Center and the Uniformed Services University, the U.S. government’s health sciences university. The two will use the MAGNUS gradient coils to assess military personnel suffering from acute and chronic mild TBI at a major U.S. military treatment facility, with the goal being to find new imaging biomarkers for diagnosing cases of mild TBI. MAGNUS has a gradient strength and slew rate for brain imaging that operate in the 500-700T/m/s and 200-300 mT/m range compared to the 200T/m/s and 50-80 mT/m of conventional systems. The aim behind the study is to establish the first objective measures for diagnosing mild TBI, as well as Alzheimer’s, Post-Traumatic Stress Disorder, Attention Deficit Disorder, and mild cognitive impairment. The study is funded by the Department of Defense.

“We are thrilled to showcase our latest advanced neuro imaging offerings to both researchers and clinicians,” said Jie Xue, president and CEO of GE Healthcare MR. “Technologies like SIGNA 7T, SIGNA UHP 3T and the head-only MAGNUS gradient coils are critical tools to help advance our understanding of diseases like Alzheimer’s and mild TBI and continue to develop new diagnostic tools and potential treatment options.”

SIGNA 7T is FDA-pending and not yet available for sale. MAGNUS and SIGNA UHP 3.0T are under investigational use.