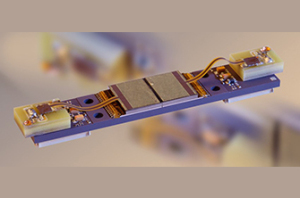 Integrated in a CT scanner prototype from Siemens Healthineers for clinical trials, the PCDM was found to increase spatial resolution, reduce X-ray exposure to patients, and decrease image noise and artifacts for better image quality, and to distinguish multiple contrast agents from one another.

"The CT scanner required a very high performing detector in terms of spatial resolution, quantum efficiency, count rate, power consumption, linearity and reliability," CEA-Leti researcher Loick Verger, business development manager in technologies for imaging systems, told HCB News. "The detector performance is the result of material properties, an optimize detector geometry and a specific electronic readout and PCB, by considering the system architecture of the CT. The challenge was enormous, no available detector existed at this time. We started with Siemens from scratch."

Siemens Healthineers approached CEA-Leti about designing, integrating, manufacturing, and testing a new generation of PCDM that would be mature enough to be integrated into an X-ray CT scanner prototype, because of the advantages they offer in imaging.

X-ray PCDMs based on cadmium telluride (CdTe) allow simultaneous acquisition of high-spatial-resolution and multi-energy images. With the use of a small-pixel size detector, the higher spatial resolution translates to greater image quality and clearer images for identifying very fine structures, such as small airways in the lungs, trabeculae in bones, and thin wires in coronary stents, than current scanner technology.

The multi-energy feature enables images to be colored, compared to the grey-level images of conventional detectors, and for the atomic number of chemical elements present in the body to be precisely determined.

CTs rely on computer-processed combinations of many X-ray measurements taken at different angles to create cross-sectional images of scanned objects, and currently use energy-integrating detectors to produce images, a process that is based on indirect conversion technology. PCDMs, in contrast, directly convert X-ray photons into electronic signals with a higher conversion yield.

And while the EIDs do not discriminate between low- and high-energy photons while registering the total energy deposited in a pixel during a fixed period of time, PCDMs count each photon, which improves the contrast-to-noise ratio of the image. It also allows the energy classification of the detected photons to be used to produce a color image that can show a precise determination of the atomic number of any chemical element, and distinguishes multiple contrast agents present in the body.
1(current)
2